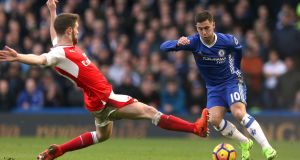 Arsenal’s Shkodran Mustafi puts a tackle in on Eden Harzard of Chelsea during the Premier League match at Stamford Bridge on Sunday. Photograph: PA.

The limp became really pronounced only when Eden Hazard was shuffling out of Stamford Bridge about an hour after the final whistle. By then the adrenaline had subsided, muscles stiffening as the pain in his ankle finally kicked in, though he could still wear the bruising as a badge of honour.

It was the legacy of a hack at the Belgian’s heels, the closest Francis Coquelin had come to checking Hazard’s glorious, scuttling run from inside his own half just after the break, a charge that had in effect culminated in the dismissal of Arsenal’s title challenge.

Hazard can usually measure the impact he has had on an occasion by counting the scuff marks and scars which are covering his body in the aftermath. There was a time, not long ago, when he might have been subdued by such crude treatment.

The clattering he took from Shkodran Mustafi midway through the first-half would have sufficed, a challenge which had the Chelsea player sprawling and winded after landing awkwardly on a hip, and led to the German being booked.

“But it’s true, when I get a lot of kicks, I feel really in the game,” Hazard said. “And when people don’t touch me, it tells me I’m not doing well. No good. I’m not saying I like to be kicked, but it’s good for me to feel I am in the game. Definitely. A motivation.

“I try to be this kind of player: the type who does something whenever he gets the ball. Sometimes in the past I’ve gone through games where I’ve not touched the ball for 20 or 30 minutes. These days I’m always trying to have lots of touches, to be involved and to play my football for 90 minutes. The manager asks a lot of me. A lot.

“When we don’t have the ball he wants me to defend, to close inside and be ready to chase the diagonal [pass], and when we do have it I have to counterattack and be free, always trying to do some ‘magic’ like I did here. With experience, you improve. I’m a better player now, more complete than I was when I was player of the year.”

He earned that accolade two seasons ago when Chelsea claimed the title by eight points and leant heavily upon the playmaker’s zest as the campaign became more of a slog from its midway point. Hazard contributed 14 goals. He boasts 10 this time round with the latest – a skip away from Laurent Koscielny, twice, and Coquelin which allied close control, balance and unnerving strength, and a smart finish across Petr Cech – “one of the best” of his career.

He left Mustafi sprawling before the end, the centre-half anticipating a dart on the outside and toppling over while Hazard calmly checked back and spread the play in-field. He tormented Arsenal with a smirk on his face.

“We all enjoyed this game,” he said. “It’s always good to score this kind of beautiful goal in a big game, and this was a big game.”

Chelsea considered that reward an exorcism for the hammering endured at the Emirates Stadium in September, with Antonio Conte’s delight unconfined.

Both managers ended up in among the Chelsea fans: the suspended Arsène Wenger reluctantly, ignoring the click of smartphone cameras delighting in his every pained wince; the other gleefully, head buried in among the east stand support in celebration.

“We are in a good place,” said Hazard, his team 30 points better off than at the same stage last season, before mimicking his manager’s words of caution over what lies ahead. The title is not won yet. The chasing pack could still rally. There are threats at Chelsea’s back.

But surely not from Arsenal. The gap between these teams now gapes at 12 points, with everything about this defeat indicative of a familiar seasonal choke from Wenger’s team.

At least Coquelin had an excuse, of sorts, for his inability to suffocate Hazard’s sprint. The French midfielder had been hampered by a hamstring complaint in the build-up only for Arsenal’s lack of midfield options – Aaron Ramsey and Santi Cazorla are injured, Granit Xhaka suspended, Mohamed Elneny in Gabon with Egypt and Jack Wilshere on loan to Bournemouth – to necessitate his inclusion.

He had competed as well as could be expected, particularly during the first-half when the visitors, aggrieved at the award of the hosts’ opener after Marcos Alonso left Héctor Bellerín concussed, had at least stayed in contention.

Yet there was no excusing the wilt thereafter. Wenger did not attempt to deflect where his own team’s deficiencies had been most evident.

“We lacked some maturity in the build-up and were caught many times on the counterattack,” he offered through a deflated monotone. “It’s always worrying. Even our experienced players were not at their best, individually.”

These are the occasions when a team needs its stellar performers, but Cech was panicked, Alexis Sánchez infuriated and isolated. Whereas Hazard thrived, Mesut Özil was anonymous.

The German looked shattered on the final whistle, socks round his ankles and tape stripped and discarded on the turf, apparently exhausted by his efforts. Yet, one scuffed shot at the near post aside, it was hard to recall him summoning anything of note all afternoon.

He ended up almost setting the tone of the entire team, plodding aimlessly through the game with no real urgency and even less conviction. In contrast, Chelsea’s leaders always seemed authoritative and influential, fuelled by N’Golo Kanté’s tireless running and blur of interceptions. Therein lay the real difference between the sides, a familiar failing which damned the visitors. Hazard may have left with a limp, but Arsenal’s challenge had proved feeble.

1 Keith Duggan: Through the glories and the disgraces, we were all Maradona addicts
2 Diego Maradona dies of heart attack, aged 60
3 Handful of God: Five magic Maradona moments
4 Andy Farrell to delve deeper into Irish squad for team to play Georgia
5 Maradona admits drug addiction
Real news has value SUBSCRIBE
Crossword Get access to over 6,000 interactive crosswords