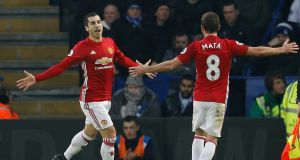 José Mourinho has repeatedly bemoaned Manchester United’s lack of ruthlessness in front of goal during his debut season at Old Trafford. To him, it has been the single biggest reason why his team have remained outside the Premier League’s top four. It was a different story here.

The game had been tight and combative up until the end of the first half, with Leicester City having given as good as they got. Step forward Henrikh Mkhitaryan. The United attacking midfielder did not do much but what he did do was of the highest class.

His breakaway finish put his team on the way to the victory – it was a devastating fusion of pace and composure – and he laid on the third goal for Juan Mata early in the second half. When Mkhitaryan makes the difference like this, it raises all sorts of questions as to why he struggled to even make the team at the start of the season.

United went from 0-60mph at an impressive lick, whereas Leicester stalled horribly. It was a tough watch for the home crowd after Zlatan Ibrahimovic had added to Mkhitaryan’s goal with his 20th of the season in all competitions and once Mata had made it three, it became a procession.

United got out a few of their party tricks and it was a nice way for them to end a sticky run of three consecutive draws in the league. United had needed to win in order to capitalise on the losses of Arsenal and Liverpool from Saturday. There was no other way to dress it up and they got the job done. As an aside, United still have to travel to Manchester City, Arsenal and Tottenham Hotspur.

Leicester’s implosion was total and these are the moments when it feels entirely possible that they could become the first club since Manchester City in 1938 to be relegated the season after winning the top-flight title.

It is now four straight losses for them in the league while they have not scored in the competition in 2017. It is stating the obvious to say that their trip to Swansea City next Sunday has taken on seismic importance.

Mkhitaryan had flickered during what was a scrappy first half, combining with Mata midway through it to tee up Marcus Rashford, who had started up front alongside Ibrahimovic. Rashford’s shot flew high. With his lovely touch and direct style, Mkhitaryan looked like the best bet to unlock the stalemate and so it proved.

He was too quick for Robert Huth, who had stepped out from his defensive station to try to repel a bouncing ball forward after Chris Smalling had beaten Wilfred Ndidi to an aerial ball. In a heartbeat, Mkhitaryan had tapped past Huth and sprinted through on Kasper Schmeichel’s goal. The right-footed finish had too much on it for the goalkeeper, although he did get a hand to it.

Leicester looked a little sorry for themselves and, with their concentration down, United twisted the knife. Antonio Valencia was given too much time to cross low from the right by Christian Fuchs and, although Wes Morgan, Huth and Danny Drinkwater were close to Ibrahimovic, they were nowhere near close enough. The United striker spun and thumped a low shot past Schmeichel.

Leicester’s situation had been cast into a grimmer light by the victories for Hull City and Sunderland on Saturday. They had begun the day just one point above the relegation zone and, perhaps, that underpinned their determination not to let United settle at the outset. The tackles had flown in during a bruising first 45 minutes, with the touchpaper lit when Jamie Vardy left something in on Eric Bailly, who was back in the United team for his first football since the Africa Cup of Nations.

Bailly had got to the ball first and, after the contact, he tangled with Vardy on the ground and then squared up to him once they had got to their feet. It was easy to imagine that Vardy’s motive was to fire up his teammates and the temperature did rise for a while. Leicester had a couple of chances, with Morgan heading into Paul Pogba and Ahmed Musa wanting too much time after Vardy had played him in. Bailly went to ground a little riskily to make the saving challenge.

Mata, unusually, was at the centre of the niggle. He jumped into a reckless tackle on Vardy in the 27th minute and there could even be a discussion as to whether he deserved a red card rather than the yellow he did get. The referee, Anthony Taylor, got the decision right. Mata’s studs were showing but his tackling foot was not off the ground. Drinkwater and Fuchs were booked for first-half challenges on Mata.

Mourinho had switched to 4-2-3-1 midway through the first-half, with Rashford going to the left and he promptly worked Schmeichel with a low shot after good work by Ibrahimovic and Pogba. At that point, there had been little to suggest that United were primed to cut loose but this was a demonstration of the sort of efficiency that Mourinho had craved.

It had felt over when Ibrahimovic scored his goal but United made sure soon after half-time. It was another dismal concession from Leicester’s point of view. Fuchs did not track Mata from Mkhitaryan’s killer pass and, with Morgan playing him onside in the middle, Mata shot comfortably past Schmeichel.

Leicester had nothing in response and United had the chances to put a more emphatic slant on the final scoreline, with Rashford working Schmeichel and Mata blowing a one-on-one with a fluffed attempted lob. The boos rang out from the home support at the end. These are worrying times for Leicester.