Kely Nascimento-DeLuca: ‘I was shocked at the lack of respect for women’s sports’ 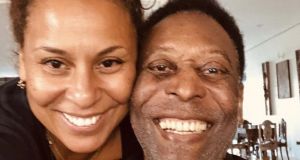 “I love the American national team. I think what they’re doing is incredible. I went all over the world and not one day went by, no matter where I was, where some young girls didn’t mention what they’re doing”. Kely Nascimento-DeLuca loves football. Sure, you could say it was passed on by her world-famous father, Pelé, but she says her love for the beautiful game is down to her Brazilian roots.

Nascimento-DeLuca saw how privileged a footballing career could be. Most of her family work in football, like her brother-in-law, Wilson Egidio, coach of Manhattan Soccer Club. Wilson happened to be scouting in one of Brazil’s famed favelas and discovered a tall, skinny, shoeless 16-year-old girl who loved playing football with the boys. Her name was Laís Araujo and thus began a journey for Kely, not only as a filmmaker and director but also a journey on how women do not enjoy certain privileges that their male counterparts get.

“I’m a woman. I’m South American, I’m, you know, alive today. So I’m not shocked at systemic sexism, but I was shocked at the lack of respect and lack of attention for women’s sports,” said Nascimento-DeLuca.

“Like, certain people were comfortable in 2015/2016 saying these things. There was a man [Marco Aurelio Cunha], who was not particularly qualified anyways at his job, but he got a job at the federation promoting the women’s game, and he came out saying they were going to make the shorts shorter, the shirts tighter, they’re going to ask the girls to wear make-up, and they’re definitely going to be much more attractive.”

Warriors of a Beautiful Game looks at the impact of the women’s game, the respect, or lack of, the game has across Brazil, Europe and Zanzibar along with using Laís’s journey as a platform in telling how hard it is for a talented young girl to be recognised in a game that refuses to accept her existence.

“Laís came to America and was picked up by Becky Burleigh and the University of Florida Gators. She got a scholarship but was not really recognised in Brazil, they tend to not look far for players in the women’s game,” explained Nascimento-DeLuca. “So, she got a good camera phone and shot little highlight reels. Her friend’s father was a part of the U20 Brazilian women’s national team, so she sent some videos on Facebook. Next thing you know, she’s not only on the team but the captain of the team.”

The progression should have been a natural one to the senior team. But, being under pressure to send money home to her family, a high draft prospect that never materialised, Laís’s senior debut never happened.

“I think it’s almost a year or six months to a year before they [NWSL clubs] decide if you’re actually going to play for the club right? They try you out, and it’s for free. They don’t pay you for that time, and she doesn’t have a safety net. You know, it’s a very privileged game in America. They sat Laís down, Becky and her agent, and they said ‘you’re not going to be at your best. You’re going to be so stressed about that part of it that you should try to go to Europe’. So, she went to Norway, and she went to Adelaide. She’s back in Brazil working on something, possibly with Sweden. ”

So is Laís ever going to wear the famous yellow, green and blue shirt of Brazil at senior level?

“Well, the thing with women’s football here is there is still an attitude towards the women’s game. I was talking to a Brazilian reporter, and he said, ‘Do you think that this coronavirus situation is going to serve as an excuse for people to close these teams?’ People are looking for any type of excuse to close these teams. They are so dying to be like, ‘Okay. Great. You had your fun, and now, you know, let us do what we’re supposed to be doing’.”

With a host of famous faces scattered across this documentary, from athletes such as USA’s Alex Morgan and Abby Wambach, tennis hero Billie Jean King, as well as the Brazil superstars Marta, Formiga and Neymar.

Neymar saw absolutely no difference with the female athletes. These were actually friends of his, people he went to church with, shared a field with, but most importantly, shared a passion with. “I also think it’s important for young boys and young girls to see this, someone like Neymar thinks that there is no difference between a female athlete, you know. Well, that means more than anything. I wanted the young girls in the world today and their little brothers and their friends to see that.”

As for Marta, time and time again, she has been vocal about the state of play in Brazil and how there won’t be a Marta and Formiga forever. “Marta asks, how do I get a young girl to want to play a game that they know they’re not going to be able to sustain their livelihood even. Forget about getting rich. A lower league male player will make more than what these girls make. Then, you have no money, and you are years behind those that are your age, but they entered the workforce, you know, six years ago, 10 years ago”.

So, what about the future. Surely, post-World Cup and Olympic hype will help? “What there needs to be is a holistic approach, I think, like, Man City is doing that,” said Nascimento-DeLuca. “I find that a purely monetary interest is kind of detrimental also. I spoke to another huge club, and the president of the club said, ‘You know, I put so much money in the women’s team, and it’s not thriving as much as I thought it would’.

“I know nothing about nothing and I could tell him right then and there why it wasn’t thriving, right? And again, the lack of resources or facilities could just end that World Cup drive. A friend of mine lives in London, he has a four-year-old daughter, and he can’t find a girls’ team for her? This should be available during the World Cup and as soon as the World Cup was over.

“I think that in Brazil there is definitely interest and people talking more, and their interest has peaked, but I think it’s also more because of who my father is. I think people, do they get excited about Marta now? Marta excites them because she just takes her country out into the world and represents it beautifully.

“I’m hoping that Warriors of a Beautiful Game reaches them in some way and does something for them, that’s the big hope. I want them to look at it and be really proud and to be able to sit in a room with their brothers, their mom, their dad, their uncles, you know, people who are interested like and be like ‘yeah, that’s right, these awesome people think we’re badass, because we are badasses’.”