Harry Arter is back in provisional Ireland squad 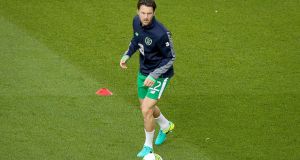 Cardiff City midfielder Harry Arter is back in Martin O’Neill’s provisional Ireland squad for the Nations League games against Denmark and Wales.

The 28 year-old had made himself unavailable for the game in Cardiff last month after an altercation with Roy Keane with the assistant manager having apparently criticised him in vitriolic terms over his failure to train for a number of days while in with the squad at the start of the summer but O’Neill said ahead of the subsequent friendly in Poland that he expected the pair to sort out their differences and his return suggests that they have.

“Roy and he had that conversation,” confirmed O’Neill as he named the squad at the Aviva stadium on Thursday, “and Harry is pretty happy with the outcome. He wants to be in the squad and he wants to play.

Meanwhile Sky Sports are reporting that Declan Rice, who was not included in the squad, has declared for England. But before that news broke, O’Neill insisted to journalists that he has not given up on the West Ham midfielder choosing Ireland over England in the coming months.

“I’ve spoken to the family and he says that he wants a bit more time to consider the situation,” he said. “I’m comfortable with that. I wouldn’t want to put a deadline on it but obviously I would want some sort of resolution (ideally by Christmas). I’m still hopeful. We’d be delighted if he chose us. I’m hopeful, I’m always hopeful, although I can’t put a percentage on it.”

Seamus Coleman is missing due to a stress fracture sustained while on international duty with a recent scan having apparently revealed that his recovery is behind the anticipated schedule. He is now expected to be sidelined for another couple of weeks before getting back to full training.

Robbie Brady has also suffered a setback just as he was expected to return for his club while Jon Walters and Stephen Ward are omitted due to ongoing injury problems.

Former Dundalk midfielder Richie Towell, currently on loan to Rotherham United from Brighton, is included for the first time while Sean Maguire returns.

*Indicates player is on loan