Insigne consigns Liverpool to defeat with late winner for Napoli 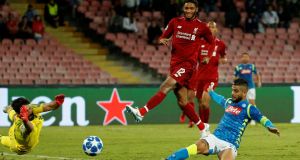 The last Liverpool team to play in Napoli was managed by Roy Hodgson, led in attack by David Ngog and had Christian Poulsen supposedly pulling the strings in central midfield.

Images of that line-up from 2010 had done the rounds on social media this week to underline how far Liverpool have travelled in the intervening eight years. All true, of course, but the present day Liverpool served up an inferior display to that drab goalless draw of yesteryear to suffer deserved defeat to Carlo Ancelotti’s side.

Lorenzo Insigne converted Jose Callejon’s low cross in the 90th minute to send the home crowd into raptures and condemn Jürgen Klopp’s visitors to the defeat they had appeared to have escaped when Dries Mertens hit the crossbar moments before. Liverpool were uncharacteristically subdued and error-strewn throughout. The positive start yielded by that dramatic victory over Paris Saint-Germain has been squandered.

The San Paolo stadium may be crumbling in places but it remains an atmospheric arena that can test seasoned Champions League travellers. Locals were queuing for the beat seats in the old house over three hours before kick-off as Ancelotti’s side looked to capitalise on home advantage following a disappointing goalless draw at Red Star Belgrade in the opening game. Not that it was full, however, and Liverpool’s early difficulties in Naples were of their own making rather than any external noise.

Naby Keita replaced Jordan Henderson in the only change to the Liverpool team that drew at Chelsea on Saturday. Klopp’s decision was unsurprising with Manchester City to come on Sunday and Henderson’s game-time being managed after a late return from the World Cup, but it will have been frustrating for the club captain nonetheless. Keita’s brief contribution did not help the mood or the Liverpool cause.

The €60 million midfielder was on the pitch for only 19 minutes before sustaining an injury in a challenge on Insigne. In that time Keita was culpable of several misplaced passes that could easily have been punished by a more clinical opponent. The Guinea international’s first slip was an overhit back-pass that would have released Insigne behind the Liverpool defence but for an alert intervention from Virgil van Dijk. Another error was seized upon by in central midfield by Callejon, who found Insigne in space with a pass floated over Trent Alexander-Arnold. The striker took the shot first time, perhaps not realising how much space he had, and narrowly missed the far corner of Alisson’s goal with a low angled drive.

Keita’s night was over minutes later following the collision with Insigne. The midfielder’s distress was obvious as he received lengthy treatment for a knee injury before being carted off, literally, by medics. A worrying sight for Klopp, regardless of Keita’s difficult night on the ball, and cue for Henderson’s swift return.

Liverpool’s problems were not confined to wayward passes in the heart of their midfield. Napoli were the more threatening side throughout the first half and regularly broke behind the outnumbered Alexander-Arnold at right back.

To Klopp’s relief and the growing annoyance of the Neapolitan crowd they were unable to capitalise due to a recurring fault – a dreadful final ball. When Arkadiusz Milik opted to find Insigne inside the penalty area rather than shoot, only to overhit his pass straight out of play, the San Paolo crowd howled in disapproval.

Their patience had been stretched by several similar errors although Milik was closest to opening the scoring in the first half when he turned Van Dijk on the penalty spot and tested Alisson with a rising shot.

The visitors did not force David Ospina, the on-loan Arsenal goalkeeper, into one meaningful save before the break despite Mohamed Salah and Sadio Mane having space to exploit. James Milner was booked on the stroke of half-time for clattering into Allan as Liverpool frustration at their own performance spilled over.

Milik forced Alisson into another sharp save early in the second half as Napoli restarted with an intensity and purpose that Liverpool sorely lacked, something that has not been levelled often at Klopp’s team in the 30 European games they have played since he became manager. The Poland international took aim from almost 30 yards with a low drive that Alisson blocked at full stretch to his left. Joe Gomez was crucially on hand to clear before Insigne could snap up the rebound. From the subsequent corner Fabian Ruiz shot straight at Liverpool’s over-worked goalkeeper. The pressure was growing, as were the number of unforced errors from Liverpool.

Van Dijk denied Insigne with a perfectly-timed tackle at the near post after Milik released Mario Rui for an inviting cross from the left. Seconds later the Netherlands defender gifted possession to Milik inside the Liverpool area and was reprieved when the striker over-elaborated yet again – prompting further derision from the Napoli crowd – and allowed Alexander-Arnold to intercept.

Alisson was not immune to errors in possession either, gifting the hosts the ball with one misplaced chip. He had Gomez – one of the few impressive Liverpool performers – to thank for a clean sheet when Callejon volleyed Kalidou Koulibaly’s deep cross goalwards and the young defender cleared in front of the line. Mertens’s miss, from Rui’s cross, appeared to have earned a reprieve for Liverpool only for Insigne, at full stretch, to tap in from close range with their defence exposed yet again. - Guardian