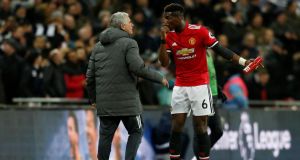 José Mourinho has said Paul Pogba will start Manchester United’s game at West Ham United, with the manager clear that although “no player is bigger” than the club, the midfielder deserves selection after training well since being stripped of the vice-captaincy.

Mourinho informed Pogba on Tuesday that he would not captain United again and the following day the pair were involved in a training-ground incident regarding the player’s posting of an Instagram story. The manager was concerned that the video featuring Pogba laughing came after the Carabao Cup defeat by Derby County on Tuesday.

This proved not to be the case and Mourinho is content to select Pogba on at West Ham.

“He’s a player like the others; no player is bigger than the club and if I’m happy with his work he plays, if I’m not happy he doesn’t play,” he said. “I’m happy with his work this week, really happy – Tuesday, Wednesday and Thursday especially, because today was not so significant – but he trained really well.

“The team needs good players, players with personality to play; he has and he plays tomorrow. Manchester United is bigger than anyone and I have to defend that.”

Mourinho bridled when asked whether he might have had the conversation with Pogba away from the cameras that were filming the session on Wednesday because it proved disruptive.

“Disruptive? I think for you it was amazing because you made a story, an incredible story out of 15 minutes of an open training session. I have to train as always – I don’t care about the cameras. What confrontation?”

Mourinho then joked that it was down to his media officer. “Maybe it is your fault,” he said. “What happened the other day happens many days; conversations with players I have many times . . . Loud criticism, loud instruction, happens every day. Coaching is about that but you make story about it. So I’m happy the rules are only 15 minutes once a month [for filming training].”

He declined to reveal what was said between him and Pogba but characterised their relationship as a normal manager-player one. “Exactly that. I think Paul told [said the same] in one of his appearances in the famous mixed zone and he is correct. It is a good relation: player manager.”

Regarding Pogba and his not being captain again, Mourinho said: “Paul and the other players in the squad know in detail the reason why myself and my coaching staff, we decide to do that. I always analyse a player as a player and when a player is captain I analyse the player by the player and the captain perspective.

“After weeks of analysing and changing opinions with my coaching staff we made the decision Paul is just a player and not a captain.” - Guardian