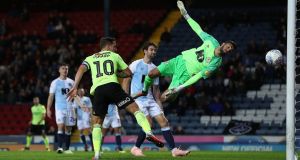 West Brom missed the chance to move back to the top of the Sky Bet Championship table but salvaged a point against Sheffield Wednesday with two late goals at Hillsborough.

The Baggies were passed by Leeds and Middlesbrough on Tuesday night and are a point behind both after a 2-2 draw with Wednesday.

Adam Reach opened the scoring in the 24th minute with a stunning goal, firing into the top corner from 25 yards, and Fernando Forestieri made it two four minutes before the break.

Darren Moore’s side looked destined for a third league defeat of the season as time ticked on but Joey Pelupessy scored an own goal in the 86th minute and Harvey Barnes grabbed the equaliser a minute later.

West Brom were also overtaken by Sheffield United, who won 2-0 at Ewood Park to hand Blackburn their first home league defeat for more than a year.

Not since a League One loss to AFC Wimbledon on September 16th, 2017 had an away team left Ewood with three points, but two second-half goals from Billy Sharp continued United’s fine form.

Craig Bryson’s 86th-minute goal earned Derby a 1-1 draw with Norwich at Pride Park and denied the Canaries a sixth victory in a row after Timm Klose had headed in a 69th-minute corner.

There was a 13-minute delay for a second-half floodlight failure at the City Ground as struggling Millwall fought back from two down to claim a 2-2 draw with Nottingham Forest.

Joe Lolley gave Forest a half-time lead they scarcely deserved and, with 67 minutes gone, the lights went out.

Tom Bradshaw was unhappy to see a header ruled out for a foul but Millwall got their equaliser in stoppage time through Lee Gregory.

There were no goals at the New York Stadium, where a depleted Rotherham side held out for a 0-0 draw with Bristol City.

1 Kevin McStay: Maybe a knockout All-Ireland Championship is the long-term solution?
2 Gerry Thornley: Ireland don’t want to box themselves into a corner
3 The Offload: Ireland are stuck in no man’s land
4 Klopp sings ‘multi-instrumentalist’ Firmino’s praises as Brazilian back on form
5 Nicky English: Galway and Waterford face battles with fatigue in All-Ireland semis
Real news has value SUBSCRIBE