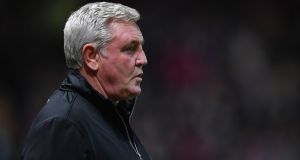 Aston Villa have sacked coach Steve Bruce after a run of poor form that has seen the club win just one of their last 10 games. Photograph: Dan Mullan/Getty Images

Aston Villa are targeting a high-profile appointment after sacking Steve Bruce following a damaging run of results that made his position untenable in the eyes of the club’s owners.

Bruce was relieved of his duties less than 24 hours after the tumultuous 3-3 draw against Preston, during which Villa missed an injury-time penalty, fans called for him to be dismissed and a cabbage was thrown at the 57-year-old manager.

Christian Purslow, who took over as Villa’s chief executive officer at the end of August, met Bruce on Wednesday to inform him that he was being dismissed, a little under two years after he was appointed. Nassef Sawiris and Wes Edens, the club’s owners, made that decision together with Purslow after coming to the conclusion that the chaotic game against Preston, who are bottom of the Championship, left them with no option but to act.

Purslow, working closely with the club’s owners, will now lead an extensive search to find a manager capable of reviving their promotion hopes. Thierry Henry, who was linked with the Villa job in the summer, is likely to be among the candidates. Other names in the frame include Sam Allardyce, out of work since leaving Everton in May, and Brendan Rodgers, the Celtic manager. Dean Smith, who has impressed at Brentford and grew up supporting Villa, could also come under consideration, although it is questionable whether he is the sort of appointment the owners have in mind.

Villa, in an ideal world, hope to have Bruce’s successor in place in time for the home game against Swansea on October 20th, which takes place immediately after the international break, although they are not wedded to that timescale and will not rush a decision that is central to their plans of returning to the Premier League.

Purslow, who spent just over 12 months as Liverpool’s chief executive and later went on to become managing director at Chelsea for three years, is tasked with putting together the shortlist for a position that is likely to attract plenty of interest, especially now that Villa have the financial backing of Sawiris and Edens, who bought a majority stake from Dr Tony Xia, the former owner, in July to put the club back on a stable footing.

Bruce’s position as manager came under scrutiny at that time, with reports circulating that Henry was going to take over at Villa Park. Although Bruce managed to ride out that storm, he was never going to survive Tuesday night, when the simmering anger and frustration in the stands came to the surface on the back of a result that left Villa with only one win from their last 10 matches.

Bruce was clearly upset and hurt by some of the things that went on off the field, including the cabbage incident, but he said afterwards that he had no intention of resigning and vowed to “battle on”.

With Villa still within touching distance of the playoffs, Bruce could have been forgiven for thinking he was only a few results away from turning things around, yet the reality is performances have been poor for some time and a team with a sprinkling of talented individuals has been playing with no clear identity for too long.

In a statement released on Wednesday afternoon, Villa confirmed that Colin Calderwood, the assistant manager, has left the club along with Steve Agnew, Stephen Clemence and Gary Walsh, who were all part of the coaching staff. Kevin MacDonald, the under-23s manager, will take temporary charge for Saturday’s game at Millwall. - Guardian