Deal involves concessions from all parties, including Bank of Ireland 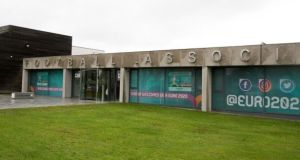 FAI HQ in Abbotstown. The organisation released their accounts on Friday which showed that they have debts of €55 million. Photograph: Gareth Chaney/Collins

The government has approved an rescue package worth €19.2 million as part of a wider plan to save the Football Association of Ireland (FAI), which was signed off yesterday.

The package, which is comprised of higher grant levels and an interest-free loan, will secure the immediate future of the beleagured association, which has been in turmoil for almost a year since revelations about its former chief executive John Delaney first emerged.

The government’s commitment under the rescue plan consists of a doubling of the FAI’s Sport Ireland grant, from €2.9 million to €5.8 million, for the next four years. A repayable grant worth a total of €7.63 million will be paid to the company which owns the Aviva stadium - which the FAI is part owner of - over the next three years.

In total, government support for the FAI between now and 2023 will come to €30,833,800, once the new funding package is added to grant monies that had already been approved, but had been on hold due to the financial and corporate governance crisis at the association.

Minister for Sport Shane Ross, insisting that the package was not a “bailout”, nonetheless said the rescue marked a “new dawn” for Irish football. It was welcomed by the association itself, with President Gerry McAnaney saying the agreement will “ensure the survival of football in Ireland”.

Liabilities of €62 million in the FAI emerged following the restatement of financial accounts for 2016, 2017 and 2018, which were republished late last year. The association has been in the midst of a financial and corporate governance crisis since the emergence of a €100,000 loan from its former chief executive, John Delaney. This sparked a series of controversies, ultimately leading the to the departure of Mr Delaney from the FAI.

The new Government funding is in addition to the €2.9 the association already receives from the State each year.

The Cabinet signed off on the rescue package on Thursday after an emergency “incorporeal” meeting. An incorporeal meeting means not all members of the Cabinet will be physically present, with some dialling in by phone.

It is understood that all sides party to recent rescue discussions have agreed to make concessions. The four parties are the FAI itself, the Government, the association’s bankers, Bank of Ireland, and European football’s governing body, Uefa.

In a statement, Minister for Sport Shane Ross said: “Today we are marking a new dawn for Irish football. This morning the Cabinet held an urgent incorporeal meeting to approve an agreement between the Government and the Football Association of Ireland.

“It has been a difficult journey to get to this place, where we can finally heave a sigh of relief knowing that Irish football has a secure future. Today we are delivering for all those who depend on football for their livelihood, as well as those who play, coach, volunteer, support or just love to support the game. That’s a lot of people.”

He added: “Of course there are many reforms still to come. Crucially, the financial assistance we announce today is absolutely conditional on these reforms being implemented. This is not a bail out by any standard.

“Today we can announce that we will restore Sport Ireland funding for football development programmes of €2.9 million annually, doubling this amount to €5.8 million each year from 2020 to 2023. €800,000 of that funding will support programmes that underpin the development of the men’s and women’s national leagues. We will also provide an interest -free loan of €2.5 million each year from 2020-2022. This is to safeguard our interest in the Aviva Stadium - where Ireland is hosting four games in the upcoming Euro 2020 Championships. This finance will be payable directly to the stadium operations company, and will be repayable from 2024 onwards.