New FAI president set to be elected on Saturday 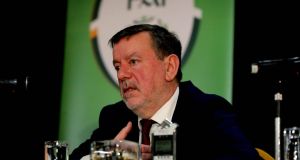 Donal Conway’s time as president of the FAI will come to an end in Blanchardstown on Saturday afternoon. Photograph: Ryan Byrne/Inpho

Donal Conway’s time as president of the FAI will come to an end in Blanchardstown on Saturday afternoon when delegates from around the country’s clubs, league and other affiliates gather to elect his successor. The move will complete the overhaul of the John Delaney-era board long demanded by Minister for Sport, Shane Ross.

Sligo Rovers chairman Martin Heraghty seems to be regarded as a slight frontrunner in what is a two horse race to succeed Conway but the outcome seems still to be far from a foregone conclusion with Gerry McAnaney, long the representative of the Defence Forces on council where he was regarded as something of a Delaney critic, expected to attract support from a wide range of sectors.

Originally encompassing a significant public ceremonial role before Delaney hijacked a great many of the cocktail sausage-eating, ribbon-cutting outings in order to cement his own grassroots base, aspects of the position have been made more important in the wake of the governance reforms implemented last year.

The President will chair the yet to be complete Football Management Committee which will take control of the game itself, while the board runs what might be considered the business end of things, and he will be on the Nominations Committee which is currently playing a key role in appointing people, including outsiders, to key positions and committees.

Heraghty, a retired senior civil servant, had been on the Rovers board for the past six years, taking over as chairman in 2016. He has represented the club on council and the Premier Clubs Alliance since then.

McAnaney’s involvement in the game goes back a good deal further than that with the former army officer having played schoolboy football for Ireland then League of Ireland for a short period with Cork City and Shamrock Rovers. His longevity at council level, where he has been involved for almost 20 years, has been painted in some quarters as a handicap, however, at a time when there is widespread desire for change. Although, he is adamant that it allows him to bring knowhow to the role.

“If somebody is saying that experience is a bad thing then I’ll happily dispute that,” he says. “I have touched on just about every strand of the game here during my time, I know it and a lot of the people in it and I think will allow me to perform this role well if elected.

“I don’t think anyone would be seriously considered for a senior role in a newspaper without having relevant experience they could point at and this is the same. I hope people will look at what I have done from playing, to working with Packie Bonner and Brian Kerr on their Technical Development Plan, to the work I did with the Defence Forces team. First and foremost, though, I hope people come along on Saturday and vote because it is another important moment for the association.”

Heraghty is already on the board, something he feels has equipped him to contribute in the more high profile role. “I think in the six months I have been a director I have gained a good deal of experience and I believe I can contribute to restoring the credibility of the association going forward,” he says.

“I come from a club with a strong grounding in the community; I know a great many people there and in other parts of football who are putting huge amounts of time and energy into it and they deserve an association that is equally dedicated to developing the future of the game. There is a huge job to be done, though, and it is not going to be completed over night.”

The winner will only occupy the position until this year’s AGM in July when it will be up for election again. This contest is simply to stand in for the remainder of the one year term to which Conway was overwhelmingly elected last summer, despite widespread criticism of his decision to stand from outside the association.

If Heraghty prevails, the Airtricity League clubs would nominate a replacement ordinary member of the board, something that would bring the number of directors with a background in the league to four.

The association has, meanwhile, released a second draft list of first division fixtures with this one based, in the wake of Limerick’s successful challenge to being denied the opportunity to apply for a licence, on the possibility of the division having 11 teams. It envisages two rounds of games preceded by a revived Shield competition, none of which is likely to do much to dampen other clubs’ opposition to the inclusion of Shamrocks Rovers’ development team in the competition. The result of the licensing process will only be announced at the start of next month.