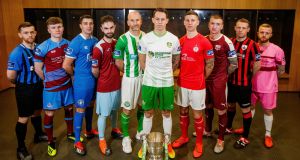 The national league executive committee (NLEC) has called on first division clubs to honour fixtures against Shamrock Rovers for the coming season after declining to reverse its decision to admit their development team to the second tier of the Airtricity League.

In a letter to the nine clubs that have threatened to boycott the games, the committee seems to signal its intent to call their bluff and the first division outfits are now expected to hold talks on Thursday in order to decide on how to proceed.

The clubs had written to the committee last week asking that the decision to admit Rovers be reversed or that a vote of all 19 league clubs be held to decide whether the Dubliners should be allowed enter a second team. They said that they would abide by the outcome of that vote.

Failing that, they said, they would refuse to fulfil the relevant fixtures. The NLEC has now replied rejecting the two requests and simply urging the clubs to play the games.

The first of those games will involve Longford Town in a month’s time and in its reply to the clubs, the NLEC states that any club’s failure to play its matches will be a disciplinary matter. It ultimately requests that the clubs “work with the committee during the 2020 season to ensure a successful completion of the competition”.

It remains to be seen whether the clubs will decide to follow through on their threat but, combined with the fact that Limerick have been allowed to apply for a licence at the last minute, it is already proving to be a less than ideal build up to the new first division season.

1 Getting behind the rotten core of rugby with Dan Tuohy
2 Ryan Baird scores a hat-trick as blue wave rolls over Glasgow
3 Irish squad in the dark as clouds hang over Six Nations
4 Larry McCarthy to become first overseas president of the GAA
5 Football fan survey: Manchester United still top the league among Irish fans
Real news has value SUBSCRIBE