Manchester City swat aside 10-man Fulham to reach fifth round 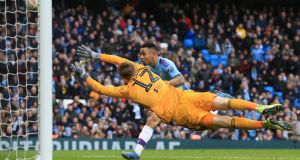 This was Manchester City’s 19th straight win in domestic cup competition, the holders coasting into the fifth round in a tie that neared a soporific state at times.

Pep Guardiola and his team will not care, of course. They are favourites to reach Wembley again this week when facing Manchester United here in Wednesday’s EFL Cup semi-final second leg and it may be unwise to bet against them reaching the FA Cup showpiece again this year.

Guardiola had plumped for Claudio Bravo not Ederson as his goalkeeper, gave Phil Foden a start in a wide left berth and retained Gabriel Jesus as the No 9 ahead of Sergio Aguero, the XI showing eight changes from Tuesday’s win at Sheffield United.

Scott Parker was without the injured Aleksandar Mitrovic whose 18 goals makes him the Championship’s leading scorer and responsible for 43 per cent of Fulham’s league return.

And, within six minutes of kick-off, the manager was without Tim Ream. This was because when the captain pulled Gabriel Jesus over in the area, Kevin Friend pointed to the spot and showed Ream a red card: double jeopardy activated as he had not tried to play the ball. Ilkay Gundogan beat Marek Rodak to give City a dream start and a nightmare one for their visitors.

Playing Guardiola’s team with 11 men can be close to impossible, having only 10 the definition of a nightmare: Parker’s reshuffle had Joe Bryan moving from left midfield to left-back, and Terence Kongolo moving across into central defence.

Riyad Mahrez was next to torment Fulham via some nifty footwork that ended with him letting fly at Rodak, who saved to his right. Bernardo Silva now got in on the soft-shoe shuffle act, and this time he doubled the lead.

From the edge of the area the Portuguese became a one-man carousel spinning a group of Fulham defenders with him, finally turning a last time inside and leaving Ivan Cavaleiro gawping as he rifled home a sublime strike.

The contest seemed already over – any remaining intrigue concerned how many City might score. Guardiola’s men toyed with their opponents, dialling up quality at will, as when Riyad Mahrez glided past Bryan, who chopped the Algerian down. Bryan was lucky not to be booked and when Friend blew for the break Fulham could be heartened by having not conceded again. A measure of the one-way traffic, though, was found in the Cottagers having had three touches in City’s area. The tally for Guardiola’s men had been near-countless.

They began the second half with another spurned chance. Angelino traded passes with Foden, then found David Silva inside the area. The captain relayed the ball to Mahrez yet from an inviting angle he blasted high.

It had Guardiola grimacing and Mahrez was replaced on 52 minutes by Raheem Sterling: whether this was related was unclear.

There was no doubt City should have been further ahead at this juncture.

Sterling’s first contribution had Guardiola bowing his head: a dribble into Bobby Decordova-Reid that meant an attack fizzled out.

The winger registered the last of his 19 goals this season a month ago. When he pounced on a powder-puff Fulham clearance, number 20 seemed inevitable but Sterling saw his shot clip the frame and miss.

Against a backdrop more akin to a summer warm-up game, Fulham’s brightest moment arrived via a free-kick in an advanced position. Stefan Johansen floated the ball in but Cavaleiro bumped into Bernardo Silva and though Parker protested Friend adjudged no foul play.

City continued to probe. Nicolás Otamendi rolled the ball to Foden, it went to Gundogan, David Silva and, once more, they could not capitalise. Then, at last, they did. This was simple and derived from Fulham again trying to play out from the back. Decordova-Reid was caught out close to goal, the ball went to João Cancelo, and Jesus nodded home.

Farcically Fulham conceded via precisely the same slipshod manner seconds later. Michael Hector was dispossessed by Jesus in front of Rodak and the subsequent sequence ended with the Brazilian finishing after the keeper beat Foden’s effort out.

Now ended Decordova-Reid’s afternoon, Parker introducing Denis Odoi for him. Yet the manager, really, might have acted more effectively by ordering his team earlier in the half to forget trying to start attacks from the back and so stop City’s high press mugging them.

By the final whistle this was as easy an outing as City could have hoped for. Next up is Ole Gunnar Solskjær’s beleaguered United. - Guardian