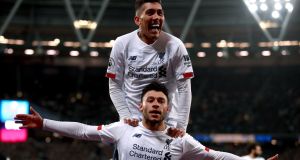 The day is nearing when, if he were so minded, Jürgen Klopp could copy his strategy for FA Cup replays and hand the rest of Liverpool’s league season to their second string. Games in hand are only an advantage if you win them and this one was ultimately negotiated in comfort, confirming a 19-point lead that only the most wild-eyed fantasist would deem surmountable.

Mohamed Salah scored a first-half penalty and then beautifully set up Alex Oxlade-Chamberlain; West Ham at least avoided the four-goal defeat that would have sent them into the bottom three but these clubs could hardly exist in more contrasting states of health.

Klopp was, for this evening at least, unmistakably present and correct, although the same could not be said for Sadio Mané. The muscle tear sustained at Molineux last Thursday will rule him out until after the winter break; it was the first time this season that the forward had been unavailable for a top-flight fixture and, if West Ham were seeking slivers of encouragement before the toughest assignment of an accursed campaign, this was probably as big a shot in the arm as anyone could offer.

The other note of optimism was, perhaps, the memory of the battling point they took against the same opponents here almost a year ago. The prospect of a draw seemed to be at the forefront of David Moyes’s mind this time; West Ham were essentially set up in a 5-4-1, freshened up slightly with a debut for the 19-year-old right back Jeremy Ngakia, and they duly emerged with sleeves rolled up.

They were doing admirably enough until, spearing a low spot kick to Lukasz Fabianski’s left with dead-eyed certainty, Salah made the breakthrough.

Liverpool’s near-monopoly on the early possession had yielded little and, until the 33rd minute, West Ham were entitled to feel emboldened. There had been only a couple of significant alarms in their goalmouth before Roberto Firmino, doing well to keep Trent Alexander-Arnold’s near-post cross alive when under pressure, worked space to weigh up a pass across goal.

It was duly threaded to Divock Origi, who had come in for Mané, but the forward still had plenty to do given that Ngakia and Issa Diop both stood in his way. Origi attempted to wriggle between them and was stopped when Diop, wafting out a leg, tripped him on the six-yard line. It seemed needless in such a tight area but Jonathan Moss’s award of a penalty was confirmed at length by VAR, which decided Firmino should not be penalised for what appeared to be a touch with his hand in the build-up.

Firmino had, at least, found the extra elements of time and quality that had previously been lacking. Andy Robertson had clipped the ball past Fabianski from an angle midway through the half, Diop chaperoning it away from ahead of the line, and had sent a delicious low delivery skidding just beyond Salah and Origi.

But West Ham had not been uncomfortable and began to find a few glimpses on the counter, Ngakia’s sparky running not quite matched by his delivery, while Manuel Lanzini was perhaps relieved to be flagged offside after diverting Arthur Masuaku’s centre wide. If their modest ambition had been to make a game of it, they had more or less succeeded.

It would certainly have become some contest if, four minutes after the interval, an untracked Lanzini had made clean contact with a Robert Snodgrass cross from the right. Instead he scuffed the ball harmlessly into Alisson’s hands. The Argentinian seems badly low on confidence and misses like this will do little to rebuild it.

When you are top of the table, you feed off these moments; when you are near the bottom, they return to bite you. Liverpool nearly made Lanzini pay immediately when Fabianski made a stunning one-handed save from Firmino, and the reprieve was only brief.

West Ham were caught on the break from their own cleared corner, failing to win the second ball and finding themselves ahead of the play as Liverpool countered. Salah found the motoring Oxlade-Chamberlain via a cute pass with the outside of his left foot and, in a cruel twist, Lanzini was now the last man. A foul, at the expense of a red card and free-kick, might have crossed some players’ minds but Lanzini offered weak resistance and the England midfielder ran through to finish coolly.

West Ham came again, at least showing some of the tenacity Moyes requires, but Alisson got a firm hand on Snodgass’s first-time effort and Angelo Ogbonna headed a corner over. The game was up and it took another full-stretch stop from Fabianski to prevent Origi from making it three, shortly before Lanzini was substituted to cheers in the kind of dispiriting undercurrent that has become this venue’s stock in trade.

Alexander-Arnold rattled his own post before Salah clipped an upright at the other end. “We’re going to win the league . . . now you’re going to believe us,” sang the visiting fans, but any moment of epiphany came long ago. – Guardian