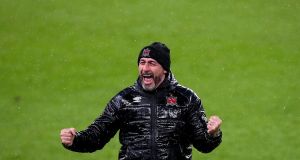 A management minnow a few short weeks ago, Filippo Giovagnoli will be, er, swimming with the big fishes in a few weeks time.

Barely a month ago he was utterly unknown in Ireland, and most everywhere else, but having successfully led Dundalk to group stage qualification in the Europa League he is now destined to manage one of the island’s two national teams . . . that being the traditional reward for this particular achievement.

The Italian, of course, follows in the footsteps of Michael O’Neill with Shamrock Rovers and Stephen Kenny, also with Dundalk four years ago, but both had been building for a while towards their big breakthrough. Giovagnoli has made his mark having taken charge in late summer since when he has transformed the fortunes of a team that had somehow lost its way.

His most immediate reward is the chance to go head-to-head with some of the continent’s best coaches and clubs. He will find out which ones some time after noon on Friday but Arsenal, Benfica and Napoli are among Dundalk’s prospective opponents in group stage games that get under way before the end of this month.

He has his preference. “I would love to play against Jose Mourinho, ” he says, “because he is an icon in football and just to meet him on the pitch would be great.”

The Italian was anticipating a group stage line-up that wasn’t even complete – with Milan having been taken into extra time by Rio Ave in Portugal – and speaking before he had had any opportunity to dissect his team’s performance here with his players. He had swung by the dressingroom on the way to do the press but the celebrations were in full swing and he had decided to leave any talking until later.

He clearly shared their joy but it was obvious too that he would have plenty to say.

“Tonight we were so nervous,” he continued. “We didn’t stick to the plan [after going 2-0 up], we didn’t try to control the game. We stepped back and that was our mistake; we should have kept on playing.

“The experience of the players was really important. Gary Rogers, Brian Gartland were good when we were under pressure but we shouldn’t have been under pressure . . . . we should have controlled the game, we were capable of doing it but we didn’t consolidate our style. At the end of the night we made history but now we will work, work, work.”

How much more history they might be able to make will become a little clearer when the draw is made but Giovagnoli must also look beyond that to qualifying for Europe again next year.

“We have another six games; six or seven [it’s seven] and they are all finals for us because to qualify for the Europa we might have to win them all, so my mind is already on Sunday [when they will play Finn Harps at Oriel Park].