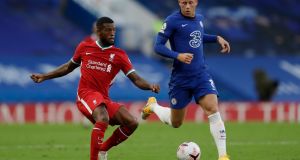 Aston Villa have signed Ross Barkley on a season’s loan from Chelsea. The midfielder has fallen down the pecking order at Stamford Bridge and will hope to press his claims for an England place by playing regularly for Dean Smith’s side.

Villa had also shown an interest in taking Chelsea’s Ruben Loftus-Cheek on loan but Barkley was Smith’s first choice. The move went through after being approved by Frank Lampard and ends any prospect of Loftus-Cheek heading to Villa Park on a temporary basis.

Lampard remains willing to help Loftus-Cheek recover from an Achilles injury by loaning him but the Chelsea midfielder’s options may be limited, with potential suitors put off by concerns over his fitness and taking on his £150,000 (€165,000) a week wages. West Ham have cooled their interest in the 24-year-old, who has also been targeted by Fulham and Southampton.

Barkley has largely been a squad player since joining Chelsea from Everton in January 2018 and was unlikely to feature much this season. Chelsea have plenty of competition for places in attacking midfield following the arrivals of Hakim Ziyech and Kai Havertz.

Barkley, who has scored once in three appearances this season, was an unused substitute as Chelsea lost to Tottenham on penalties in the fourth round of the League Cup on Tuesday. The 26-year-old needs regular games to earn a place in England’s squad at next summer’s European Championship.

Villa have shown ambition since staying up last season, bringing in Bertrand Traoré, Ollie Watkins, Emiliano Martínez and Matty Cash, and are delighted to have landed Barkley.

“Capturing a player of Ross’s quality is a real coup for our club and I am certain he will thrive here and improve our team,” Smith said.

Chelsea, who are unlikely to be successful in their pursuit of West Ham’s Declan Rice, still hope to shift players. Antonio Rüdiger is available after falling out of favour and there are doubts over the futures of Emerson Palmieri and Marcos Alonso, who was disciplined by Lampard after Chelsea’s 3-3 draw with West Brom last Saturday. Tiémoué Bakayoko is a target for Paris Saint-Germain.

Jorginho’s agent has dismissed the prospect of the midfielder joining Arsenal or PSG. “Jorginho still has a three-year contract with Chelsea,” said João Santos said. “I heard a lot about Arsenal and PSG in the last few days, but the reality is that so far no official offer has arrived for the player.” – Guardian