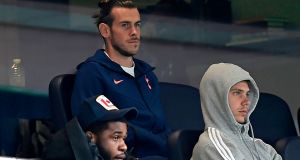 Gareth Bale will miss Wales’ clash with Ireland as he continues his return from injury. Photograph: Daniel Leal-Olivas/Getty/AFP

Ryan Giggs believes Gareth Bale will reap the rewards of returning to Tottenham, predicting the forward will thrive on his Premier League comeback after deciding against risking his talisman for Wales’ friendly against England next week and the subsequent Nations League clash with the Republic of Ireland.

Bale continues to recover from a knee injury aggravated with Wales last month and hopes to return to action immediately after the international break. Giggs said he had to think “seriously about the long term” and José Mourinho acknowledged the Wales manager had shown he “cares” about Bale.

Bale returned to training on the grass only this week after a loan return to Spurs from Real Madrid. Giggs is confident the move will pay dividends for all parties once the winger gets up to speed. “He will play more regularly than he did at Madrid,” Giggs said. “I think it’s a good move for Gareth, it’s good for Spurs and good for the Premier League in general, to have someone like that who we can watch every week. He’s at a club he knows well with a very good manager and I think he’s said himself it’s like going back home.”

Giggs said Bale getting regular game time would enhance Wales’s prospects at Euro 2020 next summer. “It will be so much better if he is playing regularly. [he will be]sharper, will be able to play those two games in a short space of time. He’s been able to manage it and produce performances because he looks after himself because of his quality and the experience he’s got, but it will be so much better when he is playing regularly.”

Giggs is able to call on the fit-again Juventus midfielder Aaron Ramsey for the trip to Wembley and games against the Republic of Ireland and Bulgaria. The uncapped Sheffield United defender Rhys Norrington-Davies, on loan at Luton, and Brennan Johnson, the Nottingham Forest midfielder on loan at Lincoln, have received senior call-ups. The former captain Ashley Williams has again been left out but Chris Mepham and Joe Rodon return and Tom Lockyer is absent due to injury. - Guardian