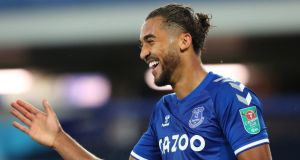 Everton striker Dominic Calvert-Lewin has received an England call-up after his fine start to the season. Photograph: Alex Livesey/EPA

Gareth Southgate has rewarded Bukayo Saka, Harvey Barnes and Dominic Calvert-Lewin for their eye-catching early season form by calling them up to the England squad for the first time.

As expected, the England manager has recalled Harry Maguire after standing him down from the previous squad following the defender’s criminal trial in Greece and he has not selected Phil Foden and Mason Greenwood. The latter pair were sent home from Iceland in September after inviting women into the team hotel – in breach of squad and Covid-19 regulations.

Southgate has named a 30-strong party for the friendly against Wales next Thursday and the Nations League tie against Belgium and Denmark that follow, knowing that he will have to rotate his personnel.

Southgate has recalled Ben Chilwell, Harry Winks, Jordan Henderson and Marcus Rashford after they missed the previous get-together because of injury but there are no places for the fit-again Luke Shaw and James Maddison. Kyle Walker is in, having been sweating over his inclusion after his red card in the 1-0 win in Iceland.

Southgate said Calvert-Lewin had really caught the eye in the opening weeks of the season.

Southgate said at a press conference: “I think with pretty much all of the squad we have not just looked at what they did last season but an emphasis on the beginning of this season as well.

“Dominic is a player we’ve liked for a long time. What he has added over the last 18 months are goals. Of course for a striker they are critical. He is in a really rich vein of form.

“His all-round game in terms of what he gives to the team, his hold-up play, his ability to press the opposition – he is a pest to play against for defenders.

“That adds a lot to the team and he has clearly been a big part of why Everton have started the season so well. He thoroughly deserves his opportunity.”

The Everton striker expressed his pride at receiving his first call-up.

“I just phoned my mum and my dad, and my mum burst into tears. It’s something we’ve spoken about since I was a young boy. To get here now and get the call-up is a dream come true. I’m very happy.

“I found out with a text message [from the FA].

“Pickers [Jordan Pickford] and Keano [Michael Keane] were obviously named in the squad and they were saying, ‘Have you got the text yet?’

“I went to my phone and saw the text message . . . I didn’t really know how to feel, if I’m being honest. I’ve thought about this moment so many times.”

Southgate said he could not promise club managers all players would sit out all three games, but stressed their workload would be managed.

He said: “We are certainly not looking to start players in three games.

“I can’t guarantee no player will play no minute of all three games. You might end up having to put someone on for five minutes and people will say you didn’t do what you said.

“Our aim is to manage the squad. We have got to be responsible. We are conscious of the welfare of the players.”

Southgate added that Foden and Greenwood would be back in contention come his next squad.

He said: “We have to send a message to all our players in our teams at every age level that that sort of thing isn’t how we do things with England.

“Then we’ve got to rehabilitate these two boys. Young people will make mistakes. These lads have suffered enough now.

“I think they need this period of reflection but that gives them the opportunity to get back on their feet with their clubs, enjoy their football again.

“I can speak to them after this camp and it will be just be about their form then.”

Versatile Arsenal left back or winger Saka, 19, is also eligible for Nigeria.

Southgate said: “I have not talked specifically to Bukayo about that. Some of our young players are eligible for more than one country.

“We’ve been impressed with his progress through our system. At times for Arsenal last year he has been very exciting.

“Everyone tells me he is intelligent and a really level-headed boy. It is an area of the pitch we are keen to look at a different profile of player and he can play a number of roles comfortably.”

He said: “Harvey has had a good couple of years. He is a different sort of attacking wide player, very direct. He was very impressive counterattacking against Manchester City the other day. That has been a consistency for a period of time.

“Some of these boys we might not have been looking at had we had two fixtures but this is a bit different. It is a chance for them to work with us and a chance for us to get to know them a bit better.” – Guardian and agencies