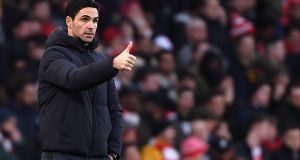 Arsenal manager Mikel Arteta: ‘If we are able to win three or four games on the trot then we are right there.’ Photograph: Getty Images

Arsenal’s ambitions of mounting a late bid for the Champions League places are on the line at Stamford Bridge on Tuesday night and Mikel Arteta admits that three points against Chelsea, followed by a sustained run of good form, are necessary if their hopes of turning a fraught season around are to be maintained.

Ten points lie between Chelsea, in fourth, and Arteta’s 10th-placed side. The head coach, whose only defeat during a month in charge has been a damaging 2-1 home reverse to the same opponents on December 29th, knows an extension of that gap would effectively kill off their top-four chances but also believes the present situation provides room for optimism.

“It’s very, very important for us to win this game to fight for [the top four],” Arteta said. “The game we played at home could have made a big difference and we were very close to it. Tomorrow we need to win.”

Arsenal conceded twice late on in that fixture and it epitomised an issue that has dogged them all season, including during the 1-1 draw with Sheffield United on Saturday. They have simply been unable to produce 90-minute performances but Arteta retains belief that they can improve on a run of two wins in 15 games.

“Absolutely, and that’s the challenge,” he said. “But if we are not able to do that then the dream of being up there, it’s impossible.

“If we are able to win three or four games on the trot then we are right there. That’s the challenge we have and all the teams have at the moment. When you look at the results from the weekend, all the draws, and how one decision changed the whole game between Burnley and Leicester, the margin is not that big. So it is complicated. You have to dominate every aspect of the game.”

He pointed out that Arsenal are far from the only potential contenders to lack consistency. “Everyone is having a lot of problems to put together back-to-back wins,” he said. “The league has been very competitive this season and the gaps aren’t that big. There are still four months to play and a lot of things can happen, a lot of games between the top teams as well, so I think that will change.”

Failing to qualify for Europe in any shape or form would be “a big concern for everybody”, he said, and it means his current plans are concentrated upon the short term, even though it is clear he has taken on an extensive rebuilding job.

“I don’t look at next season at all; I just look at what we can do to get better, and what happens next season is only going to be a consequence of what we are able to do this season,” he said. “We cannot waste these four months just thinking about next season, because the hurry of a big football club is now, not in the summer.”

Arsenal’s effort to change their campaign’s complexion will take place without Pierre-Emerick Aubameyang, who serves the second game of a three-match ban, but Sokratis Papastathopoulos may return after being ill at the weekend. Arteta offered no update on the club’s transfer endeavours, which include efforts to sign Layvin Kurzawa from Paris Saint-Germain, but said it was “a possibility” that January may pass with no new arrivals.