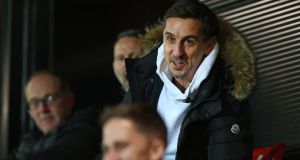 On Thursday night, even as Jürgen Klopp sat forlornly in a deserted media room in Anfield talking on video conference about Liverpool’s nightmare against Burnley, Gary Neville, the former Manchester United defender and resident jester, popped up in the cyber sphere adding salt to the wounds. The Nev has over four million followers on a Twitter account on which he primarily delights in provoking and taunting the vast legions of Liverpool fans.

It’s been a while since he had such cause to gloat. Liverpool had lost 1-0 to Burnley, their first home defeat in almost four years. Klopp, the Zen master of high performance completely lost his rag with Burnley’s manager, Sean Dyche, who gave the German his ultimate doorman-you-wouldn’t-mess-with glare in the tunnel at half-time.

10 How Enter The Dragon became a martial arts phenomenon

18 Legal challenge brought over decision a woman was overpaid pension

20 Deutsche Bank under pressure over derivatives sales in Spain

21 Budd Schulberg: The screenwriter who made Marlon Brando a star

23 Dublin most popular city for Brexit relocations by financial firms

24 Bill Gates: ‘I’m not trying to take anything away from Greta Thunberg, but...’

31 Irish people buying more immunity boosting foods than ever before

32 Pfizer vaccine may be less effective in people with obesity

33 Out of the wasteland: the first World War and modernism

35 Q&A: What are the new coronavirus variants and should we be worried?

40 Owen Doyle: Calamity in Cardiff is hard to get your head around