Danish draw a thing of beauty for Irish players

Emmet Malone at the Parken Stadium 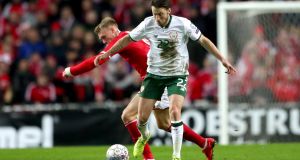 Harry Arter: “In an ideal world, you want to score an away goal, but to come over here and keep them at bay was a good effort.”

The Danes may already have been talking about the difficulty their hosts will be in on Tuesday if they can get a goal but for the Irish it was about the here and now. They had come here aiming to prevent Age Hareide’s men scoring and now they were leaving having achieved that goal.

“Before the campaign, if we were offered a chance to win a one-off game against Denmark at home, we’d have bitten your hand off. Now we have to take it,” said Harry Arter.

“I think away from home, a draw has got to be seen as a positive result. In an ideal world, you want to score an away goal, but to come over here and keep them at bay was a good effort. We dug in deep and saw them off pretty comfortably. The World Cup feels closer now than it did before the game.”

Aspects of the Irish performance will inevitably be picked part and the locals were quick to claim that only one team had tried to play football on the night. But Ireland’s captain, Ciaran Clark, insisted that the result had been the priority even if that meant the game was something that had to be endured by the travelling support.

“We didn’t want to make it like that for their fans. It was about coming out here and getting the right result no matter how we played. We knew there was a job to be done out here and we’ve done it.

“It is what it is,” he continued. “We’ve got 90 minutes to get there now. It’s close for us but we’ve got a really tough game. Tonight was tough and I’d expect the same on Tuesday.”

The Danes, in fact, were at something of a loss to explain how they had not scored from at least one of their three clear cut chances and while their finishing let them down more than once, Darren Randolph had certainly been central to Ireland’s survival on a couple of occasions.

His saves from Andreas Cornelius in the first half and Yussuf Poulsen late on in the second were key moments in the game and Clark was happy to acknowledge the way in which he had helped to keep in the team so firmly in this tie although, he insisted, it was also an impressive collective effort.

“He kept us in the game by making some great saves,” he said, “especially the one at the end but it was a great defensive performance from the whole team.”

Longford claim first O’Byrne Cup since 2000 16:43
Leinster qualify as top seeds with Benetton win 15:50
Tottenham draw a blank as Watford’s revival continues 14:55
Leeds’ promotion hopes take another hit at QPR 14:51
Lee Westwood rolls back the years to lead by one in Abu Dhabi 14:47

1 St Michael’s conveyor belt showing no signs of slowing down
2 Leinster qualify as top seeds with Benetton win
3 Welcome to Iten in Kenya – home of champions and cheats
4 Niall Saunders pursues his rugby dream through blood, sweat and tears
5 Saracens to accept second 35-point deduction and effective relegation
Real news has value SUBSCRIBE
Crossword Get access to over 6,000 interactive crosswords