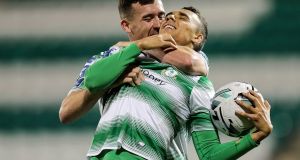 Graham Burke hit the winner – his first goal back in a Hoops shirt – as Shamrock Rovers stretched their unbeaten league run to seven games against 10-man Waterford at Tallaght Stadium.

The victory reduces Dundalk’s lead at the top of the Premier Division table back to four points, though Rovers have played two games more.

With just one league win in 10 now, this defeat heightens Waterford’s relegation anxiety as they remain just four points ahead of second from bottom Finn Harps, though they do have a game in hand.

Far from the 5-1 stroll at the RSC when the sides met just eight days previously, Rovers struggled to impose themselves on a well-organised Waterford before availing a dreadful error which gifted them the lead on 36 minutes.

Maxim Kouogun’s square pass to central defensive partner Rob Slevin was slightly overhit. But under no pressure, Slevin’s back pass to Matt Conor fell way short allowing Graham Cummins in to sweep the ball past the Waterford goalkeeper for a soft second league goal for Rovers.

Fellow midfielder JJ Lunney whipped in a quality, arced delivery that Dean O’Halloran meet with a flick header to send the ball flashing past Alan Mannus.

Waterford were reduced to 10 men three minutes into stoppage time when Lithuanian Chvedukas was shown a straight red card for a blatant trip on Rovers’ new signing Daniel Lafferty.

And before referee Derek Tomney eventually blew for half-time, Waterford somehow survived a sustained scramble in their goalmouth from Dylan Watts’s resultant free kick when the ball twice came back off an upright.

Rovers introduced Jack Byrne and Aaron McEneff from the bench at half-time to dominate from the restart.

They were back in front six minutes in, Lafferty’s deep cross from the left volleyed home from close range by Burke for his first goal since returning to the club on loan from Preston.

Burke crashed an angled drive off a post minutes later from another Lafferty pass, though Rovers struggled to create many further chances until late on.

Connor made the save of the night on 84 minutes to deprive Aaron Greene, who then missed a proverbial sitter moments later.

It almost proved costly as Waterford were close to snatching an equaliser in added time.

Mannus parried a deflected shot from Zack Elbouzedi with Lee Grace putting the rebound off the toe of Walter Figueira for a corner.

1 Gordon D'Arcy: Ireland must conquer fear on a scary Halloween in Paris
2 Robbie Henshaw likely to be the only Irish change for France finale
3 Dave Heffernan delighted to have banished bad memory of his first cap
4 Seán Moran: Will a silent, empty Hill help to loosen Dublin’s grip on Sam?
5 Cork City expected to approve €1 takeover by Preston owner
Real news has value SUBSCRIBE