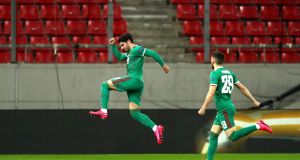 Pedro Neto earned Wolves a valuable 1-1 draw at 10-man Olympiacos as they forgot their frustration at being forced to play amid the coronavirus outbreak.

Ruben Semedo’s first-half red card in the virtually empty Georgios Karaiskakis Stadium had given Wolves early encouragement but the game will only be memorable for the circumstances it was played in.

Nuno Espirito Santo’s side return from Greece with a positive result in exceptionally trying circumstances, although there is no guarantee next Thursday’s second leg will go ahead.

With a backdrop of a deadly global pandemic, boss Nuno again criticised the decision to play pre-match, calling it absurd.

Wolves had lobbied Uefa to postpone the game — an appeal which was rejected — after Olympiacos owner Evangelos Marinakis announced he had tested positive for coronavirus on Tuesday.

Meanwhile Bayer Leverkusen celebrated a 3-1 win at Rangers in front of a full house at Ibrox and Istanbul Basaksehir fans rejoiced after an 88th-minute penalty by Edin Visca gave them a 1-0 home win over FC Copenhagen.

Rangers fell behind to a 37th-minute Kai Havertz penalty, given after a lengthy VAR check as George Edmundson handled a Charles Aranguiz cross. Aranguiz scored midway through the second half as he drilled in a half-cleared cross before Edmundson pulled one back for Rangers, heading home a James Tavernier corner.

Substitute Leon Bailey then put Leverkusen in the driving seat to reach the last eight with a classy late goal, leaving his marker flat-footed with a cheeky dribble before curling a sublime shot past goalkeeper Allan McGregor.

Swiss side FC Basel stunned Eintracht Frankfurt 3-0 away behind closed doors, as Samuele Campo curled in a 27th minute free kick before substitute Kevin Bua made it 2-0 and set up Fabian Frei to drill home the third. Shakhtar Donetsk took full advantage of an empty ground at Vfl Wolfsburg and beat the German side 2-1 thanks to goals from Junior Moraes and Marcos Bahia, who cancelled out John Anthony’s Brooks effort for the hosts.

Viktor Kovalenko missed a penalty for Shakhtar before Wout Weghorst also squandered a spot-kick for Wolfsburg in an eventful first half. Two matches were postponed as Spanish side Getafe refused to travel to Italy and face Inter Milan while AS Roma said they could not travel to Spain to play Sevilla because of flight restrictions.