Jack Byrne recognised for strong start to the season 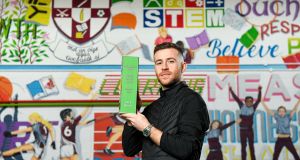 Jack Byrne of Shamrock Rovers with his SSE Airtricity/SWAI player of the month award. Photograph: Sportsfile

Jack Byrne has been named as the Airtricity/Soccer Writers’ Association of Ireland player of the month for February with the 23 year-old midfielder recognised for his central contribution to Shamrock Rovers’s strong start to the season.

The Dubliner scored twice as Rovers kicked off the new campaign with four straight wins during the month, including a dramatic 3-2 defeat of title rivals Dundalk in which Byrne grabbed the winner. It is the third time he has won the award and he finished ahead of Rovers team mate Graham Burke who scored five against Cork City.

“I’m happy that the team is playing well and that we are getting wins,” said the player on Thursday morning. “I don’t think if I’d be collecting this award if the team wasn’t doing well at the top of the table. So it’s a reflection on how the whole team is doing.

“It’s a good start but that’s all it is. It’s only a start. It’s going to be a long season and it means nothing if we don’t carry on. We know where we fell down last season.”

Clearly Byrne is happy that his early season form had kept him in contention for the place in Mick McCarthy’s squad for the Euro2020 playoff, should it go ahead as planned.

Even before Leo Varadkar’s announcement of restriction on public gatherings and the Slovaks declaring a state of emergency then requesting a postponement of the game, however, Byrne was pretty sceptical about match going ahead as currently planned.

“I think that it’s great that he (McCarthy) has come and watched me; I think he’s been along a few times now, that’s good. It’s obviously a big achievement to get the international manager to come and watch you play, to be in his thoughts,” he says.

“But I can’t see that happening to be honest. I can’t see the game going ahead if you can’t bring your best players because of travel restrictions.

“Whether I’m in the squad or not, I’ve family that have booked fights to go over and watch the game. You want people there, you want the fans there but it’s just one of those things that you can’t affect. You just have to get on with it. It’s safety first. If the game is called off or played behind closed doors, that’s the way it is.”

Much the same can be said about the league here which looks set to shut down in the wake of the government announcement and while Byrne believes the situation is manageable given the circumstances, he is concerned about the effect that any prolonged closure could have on some of the clubs.

“I’ve never been involved in anything like it,” he says. “It will obviously impact a lot of clubs here because a lot of clubs need the gates. If they were going to play games behind closed doors, I think they’d have to suspend the season. A lot of the smaller clubs, they might not have the money to function without the crowds.

“People’s lives are the most important thing, it’s obviously a big issue but I don’t think that if it’s two weeks or so it will be such a big thing. We’ve seen games called off because of the weather so. It’s obviously just whether teams can get in and keep training.”

As for the disruption to Rovers and whether any suspension of the league programme now might derail the club’s tremendous start to the season, Byrne doesn’t think so.

“I don’t think it will have too much of an impact because towards the back end of the season the games are well spread out with cup games and all that sort of stuff. It doesn’t matter whether it’s Friday-Monday or Friday-Friday or every two weeks. It doesn’t really matter. It’s the same teams you are going to be facing.

“So if you prepare properly and are ready for the game then it doesn’t really matter if they come in quick succession one after each other.”

1 Leinster look ready to step things up and burn off Saracens challenge
2 Keith Duggan: Surreal story of John Delaney needs to act as a wake-up call for FAI
3 Born to ride, born to win: Sam Bennett, the making of a green machine
4 Will Connors now delivering on his massive potential
5 Michael Walker: Gareth Bale’s place in Real’s history a strange type of glory
Real news has value SUBSCRIBE
Crossword Get access to over 6,000 interactive crosswords