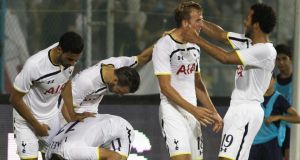 Erik Lamela inspired Tottenham to a 2-1 victory over AEL Limassol in the in the first leg of their play-off in Cyprus last night.

AEL looked set to inflict a shock defeat on Mauricio Pochettino’s side until the Argentinian’s game-changing introduction in hot and humid conditions.

Lamela managed just three league starts for Spurs in an injury-disrupted debut season but his introduction here turned the game for Spurs.

The returning Jan Vertonghen and Paulinho made mistakes in the build-up to Adrian Sardinero’s 14th-minute opener. Tottenham were struggling but just minutes after his introduction, Lamela sent a wonderful clipped ball which Roberto Soldado struck home with 15 minutes to go.

Hans Vanaken was the lucky recipient of McGregor’s blunder as the former Rangers goalkeeper passed the ball straight to him after 58 minutes , allowing the 32-year-old to round him and roll the ball into the net.

Defender James Chester came agonisingly close to making it 1-1 in the 89th minute but he missed the target with a free header from Sone Aluko’s cross meaning the Belgian side will take the advantage into the return leg at the KC Stadium.

Only goalkeeper McGregor and Chester kept their places from Hull’s Premier League opener against QPR at the weekend in a much-changed side. Yannick Sagbo had the best chance of the first half for Hull but he scuffed his shot and the danger was cleared.