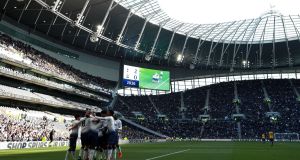 For Daniel Levy, it has taken 18 years; a journey driven by his perfectionist nature, his obsession with the finest of details.

The Tottenham chairman has overseen the construction of a squad to challenge at the top of the Premier League and the move to a state of the-art training complex. Now, the centrepiece is in place – the 62,062-capacity new-build stadium, which will officially open against Crystal Palace tonight.

Yesterday morning felt like a time for Levy to exhale; even to congratulate himself, however alien that is to him. Then, Mauricio Pochettino followed him into a media briefing and upped the ante. Dramatically so.

The manager chose the eve of the full stadium unveil to outline his vision for what he called the club’s next chapter, the beginning of their next project. It amounted to a challenge to Levy and everyone else at the club to reset, dig deeper and be smarter.

To Pochettino, Spurs must now think and act like an elite-level club and he mentioned Barcelona, Bayern Munich, Juventus and Real Madrid as the examples to follow. To him, they must “operate in a different way” and the bottom line was they had to do the thing that has eluded him during his near five-season tenure – win the league and/or the Champions League.

“We need to close the chapter,” Pochettino said. “We are not in Chigwell [at Spurs Lodge training ground] any more; we are not at White Hart Lane with 36,000 [capacity]. The magnitude of the club has grown 100 times. We cannot operate in the same way as five years ago. We are in another dimension.

“When you arrive here now, it looks like a big club. Before, you could say: ‘Yeah, but the stadium only holds 36,000’. Now, there is no point in thinking like a small club. You must think like a big club. If you want to compare to Barcelona, Bayern Munich, Juventus or Real Madrid, you can’t think you are Tottenham with 36,000.

What does it mean to think like a big club and to operate in a different way? “That is what we have to discuss about the project [with Levy],” Pochettino said. He was a little vague, delivering the grand rhetoric but not exactly backing it up with clear illustrations.

It was rather like his big speech at the end of last season, when he called on Levy to “be brave and take risks” in the creation of a new project “if we want to be real contenders for big trophies”. Back then, Pochettino thought that the club were about to enter the new stadium. Now, after all of the delays, they truly are and it was easy to feel that he was repackaging the rallying cry.

As ever, his assistant, Jesús Pérez, was alongside him but, unusually, his other coaching lieutenants, Miguel D’Agostino and Toni Jiménez, were also present to hear what he had to say.

So what does Pochettino want?

He dropped a hint that it might involve heavier spending on transfers than he has so far been permitted, even if he is aware the club must repay massive debts on the £1bn project and he is not a manager, generally, to demand big-name signings. Pochettino’s net spend on permanent transfer fees at Spurs stands at £27.25m.

“I was talking with Daniel after Sunday’s Liverpool game about the very good action of [Virgil ]Van Dijk [when the defender dealt with a two on-one Spurs break],” Pochettino said.

“Van Dijk was £75m 18 months ago. The goalkeeper [Alisson] was £70m. They had two midfielders on the bench [Naby Keïta and Fabinho] who they spent about £100m on in the summer.

“The people sometimes say that Tottenham is like Liverpool. In what? Yes, we are going to be better than Liverpool because we have a better stadium and a better training ground but it’s another thing to compete as we need to operate, maybe, similar to them in the future or not.”

When Pochettino spoke out at the end of last season, it was possible the Real Madrid job was about to become vacant – a position he had been linked to. In other words, he had a degree of leverage with Levy. He would not appear to have as much now, with Real and Manchester United – another club that have coveted him – having both just appointed managers to long-term contracts. What can change for him at Spurs?

The thing that has changed irrevocably is the hi-tech structure that occupies 1.3m square feet off the Tottenham High Road. Many fans are primed to experience the new stadium for the first time and it is, quite simply, a triumph for Levy, who came to the club as chairman in 2001.

Levy has been the de facto chief architect, having the final say on absolutely everything, from the strip lighting in the basement car park to the design of the urinals in the general admission areas. He was asked whether he could confirm that the overall costs had risen to £1bn.

“It is of that order,” Levy replied. “In terms of the payback, it’s over the long-term.”

He expects to see match-day revenues double to around £100m per season, commercial incomes increase and other areas, from NFL matches to conferencing events, contribute to growth. In the end, though, he agrees with Pochettino: it is about thinking big and winning.

“We’ve created the infrastructure to become one of the biggest clubs in the world,” Levy said. “My dream is to win. Winning is both on and off the pitch and we are going to keep going until we get both right.”

The last word went to Pochettino, who hopes that the stadium can give his team a lift against Palace, after four losses and a draw in five league games – the worst run of his time in charge.

“No one believed us five years ago when we explained what we were going to do,” Pochettino said. “People started to write: ‘What does this guy smoke? What pills does he take?’ Now, for me, it’s going to be a massive summer. The biggest? Yes.”