Zinedine Zidane insists Raphael Varane is not for sale 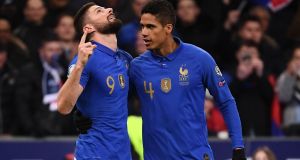 The France defender, who joined Real from French side Lens in 2011, has been linked to a move away from the Bernabeu this summer.

“I don’t want a Madrid without Varane,” Zidane said at a press conference reported by marca.com.

“He didn’t say anything to me. He’s at the best club in the world and he knows it, he’s won a lot of things.”

Zidane added it would be “disrespectful” to talk about a dressingroom clearout but acknowledged the club would have to make changes ahead of next season.

“There are many things that we are talking about changing next year, but you have to respect all of the players who are here,” he continued.

“Talking about cleaning (out the dressing room) seems disrespectful.

“We’re going to have to make changes, but this is not the time to talk about it.”

The manager, who took over for a second time less than a month ago, would also not be drawn into commenting on the future of Real’s record signing Gareth Bale after the Welshman was booed by Madrid supporters during the 3-2 win over Huesca on Sunday.

Zidane told the press conference, also reported on the club’s website: “The whistles are never good, but they also booed at me and you have to accept it.

“You have to have personality for that and to accept what people want.

“Regarding the future of Gareth and other players, we’ll see.”