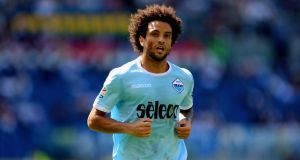 West Ham have signed midfielder Felipe Anderson from Lazio for a club-record fee.

Anderson, once capped by Brazil, scored eight goals for Lazio in 32 games last season, helping them to fifth place in Serie A. He spent five years in Italy, having moved to Rome from Santos in 2013.

“They were great players and idols here, and I’m aiming big, who knows, maybe I could hit their heights and be a legend here too. I’m really happy to be here. It’s a dream come true.

“I want to thank the owner, David Sullivan, because he made a big effort to bring me here. I know how difficult it was, so I have to thank him a lot, and I hope I can repay his faith in me on the pitch with goals and winning games.”

1 David Clifford sends everyone back to their corners unbeaten
2 Ashleigh Barty now living up to all her earlier promise
3 Six Nations: A 21st-century tournament that saw Irish rugby come of age
4 Sublime 67 leaves Rory McIlroy right in the mix at Torrey Pines
5 Mike Catt hopes to have Irish backs purring in Six Nations
Real news has value SUBSCRIBE