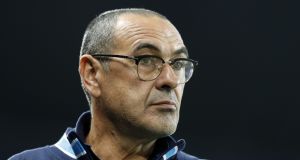 All roads led from Naples to London on Saturday as Chelsea appointed Maurizio Sarri as their new manager and then announced the signing of Italy midfielder Jorginho.

Just hours after announcing ex-Napoli boss Sarri as Antonio Conte’s replacement on a three-year deal, Jorginho was unveiled on a five-year contract.

Sarri’s arrival was widely expected, long before Friday’s sacking of Conte. During three years with Napoli, Sarri helped the club to two second-placed finishes in Serie A and won the Coach of the Year award in 2017.

Sarri said: “I am very happy to be coming to Chelsea and the Premier League. It is an exciting new period in my career.

“I look forward to starting work and meeting the players on Monday ahead of travelling to Australia, where I will be able to get to know the squad and begin our match action.

“I hope we can provide some entertaining football for our fans, and that we will be competing for trophies at the end of the season, which is what this club deserves.”

Sarri will have a friendly face on hand when he starts work, with Jorginho now in place.

The 26-year-old had been linked with a move to Manchester City, but has landed in London instead. City are reportedly unhappy at how events have transpired, having felt they had a deal in place.

Conte’s future was finally resolved after months of speculation and despite the Italian overseeing pre-season training earlier this week.

The 48-year-old had a year remaining on his contract, but has left the Blues 55 days after lifting the FA Cup in his final match in charge.

Conte led Chelsea to the 2016-17 Premier League title in his first season as boss, but went after failing to qualify for the Champions League and a souring of relations between himself, club hierarchy and some influential players.

Director Marina Granovskaia added: “We are delighted to welcome Maurizio and are looking forward to him bringing his football philosophy to Chelsea.

“Maurizio’s Napoli side played some of the most exciting football in Europe, impressing with their attacking approach and dynamism, and his coaching methods significantly improved the players at his disposal.”

On Jorginho, Granovskaia added that Chelsea had signed one of “the most coveted midfielders in Europe” and that: “He has demonstrated his quality working under Maurizio Sarri and we are convinced his signing will help bring further success to Stamford Bridge.”

His first game in charge will be in the friendly with Perth Glory on July 23rd.