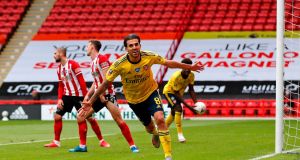 Arsenal’s first victory over Sheffield United in three attempts this season saw them safely into the FA Cup semi-finals in a game that only sprang to life in its final minutes.

This was United’s first home game since the restart and Chris Wilder said at the outset his players could have done with the support of a partisan cup tie crowd to lift their performance, the subsequent 90 minutes proving him right.

The visitors led for most of the game through a first half Nicolas Pépé penalty, a situation that seemed to Mikel Arteta and his somewhat experimental side until David McGoldrick gave the Blades hope of extra time when the Arsenal defence failed to deal with a Jack Robinson long throw.

Sheffield might even have won the tie in the closing minutes when it needed a good save from Emiliano Martinez to keep out a shot from Billy Sharp, but Arsenal snapped out of cruise control mode to come up with a winner of their own in added time. Bukayo Saka and Eddie Nketia helped carry the ball forward energetically, and though substitute Dani Ceballos was forced out wide on the right, he surprised a defence waiting for a cross by shooting past Dean Henderson from the narrowest of angles.

There will be some debate over the penalty that put Arsenal in control of the game, though little doubt in the end that the side with the most pace and ideas in attack had won through.

The home side thought they had taken the lead eight minutes in, only for VAR to rule out John Lundstram’s close range effort for offside, with the ball on the centre sport ready for a restart. Lundsram had headed over the line after Ollie Norwood’s corner had been headed back across goal by Oli McBurnie, and Arsenal’s susceptibility at set pieces was exposed again four minutes later when McGoldrick was inches away from sliding in at the far post following the first of Callum Robinson’s long throws.

Arsenal had hardly done any attacking by the time they took the lead midway through the first half, referee Paul Tierney taking a long look at Chris Basham’s tackled from behind on Alexandre Lacazette before deciding to award a penalty. The decision verdict have been slightly harsh on the defender, though there was no doubt Lacazette had been caught.

The striker and most likely penalty taker with Pierre-Emerick Aubameyang on the bench was still off the field receiving treatment when Pépé stepped up to slot the spot kick calmly past Dean Henderson. Pépé might have been on the scoresheet again on the half hour when he burst into space and shot early and on target, though this time the goalkeeper got down quickly to make a one-handed save.

The visitors’ confidence grew after taking the lead, with Pepe and Joe Willock showing up well going forward, and Ainsley Maitland-Niles always a willing outlet for overlaps on the right. Henderson almost set up a scoring opportunity for Willock when he could only push a Maitland-Niles cross as far as the six yard line, but the ball did not come down quickly enough for the Arsenal player to shoot.

Norwood brought the first save of the game from Martinez in the Arsenal goal on the stroke of half time, though the best chance of another goal before the interval fell to at the other end to Pépé, who missed the target from a cutback with most of the goal at which to aim.

McBurnie opened the second half by meeting a Robinson throw with a near post header, only to find Martinez alert to the danger. The Arsenal goalkeeper was a little more flustered when a clearance from Henderson caught the wind a couple of minutes later and an enormous bounce only just cleared his crossbar, but even when David Luiz left the field with a hamstring injury Sheffield were unable to put their opponents’ defence under sustained pressure. Rob Holding, Luiz’s replacement, looked a little rusty at first and gave the ball away on occasion, but Arsenal were holding out comfortably until McGoldrick’s close range equaliser helped bring about an unexpectedly lively ending. - Guardian