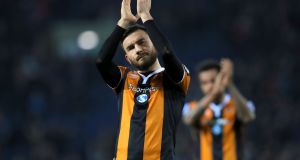 West Ham have completed the signing of Scotland forward Robert Snodgrass in a £10.2million deal from Hull City.

Boss Slaven Bilic hopes a concerted recruitment drive can propel the Hammers up the Premier League table from 10th spot, with star asset Dimitri Payet still angling for a move.

“I’m delighted because this is a massive club with great tradition,” said Snodgrass.

“This is the sort of club which speaks for itself, the fans who come here and support week-in week-out and moving to and selling out this new stadium is terrific and I want to be part of it.

“The owners and the manager are trying to build something here and I just can’t wait to get started. I feel this is a club with real ambition, with the new stadium, great players and a manager of his calibre at Premier League level.

“The lads will say we want to be up in the top half of the table and repeat last year, so it’s up to us.

“The club has had a few good weeks with results and if I can add to that, great. I’m just looking forward to meeting my new team-mates and getting started.”

While France playmaker Payet edges towards a potential West Ham exit, boss Bilic and the club’s board continue to chase new recruits.

Euro 2016 winner Fonte’s arrival from Southampton kick-started the Hammers’ January spree, and Bilic will be keen to add yet more new faces before the window closes.

Snodgrass meanwhile has admitted he was talked into joining West Ham by a host of former Scotland stars who also just happen to be ex-Hammers.

“The traditions of the club also attracted me and I spoke to Frank McAvennie, who sold the club really well, which was great,” said Snodgrass.

“Ray Stewart and Christian Dailly were also here, so if I can do as well as Frank and the rest that would be great.

“This is my own chapter and it’s about me and not them and I firmly believe in my ability and that I can go and get a relationship with these fans and my new team-mates and really drive the team up the league.”