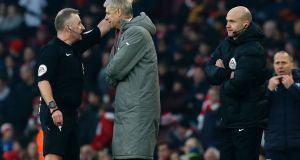 Arsene Wenger has been given a four-match touchline ban for remonstrating with officials in Arsenal’s 2-1 Premier League win over Burnley.

The Gunners boss will now be forced to sit in the stands for Arsenal’s FA Cup trip to Southampton on Saturday, as well as three Premier League matches.

Wenger admitted a misconduct charge from the Football Association after appearing to push and verbally abuse fourth official Anthony Taylor in Sunday’s dramatic late success over the Clarets.

Wenger must also watch from the stands during Arsenal’s Premier League matches against Watford, Chelsea and Hull.

“Arsene Wenger has been given a four-match touchline ban with immediate effect after he was charged for misconduct following Arsenal’s game against Burnley on Sunday, January 22, 2017,” read an FA statement.

“It was alleged that in or around the 92nd minute, he used abusive and/or insulting words towards the fourth official.

“It was further alleged that following his dismissal from the technical area, his behaviour in remaining in the tunnel area and making physical contact with the fourth official amounted to improper conduct.

“The Arsenal manager, who was also fined £25,000, admitted the charge and requested a personal hearing which took place before an Independent Regulatory Commission on Friday 27 January.”

Wenger was sent off by referee Jon Moss after allegedly using abusive or insulting language towards fourth official Taylor when Burnley won an injury-time penalty.

Arsenal’s French manager attempted to watch the remainder of the contest from the entrance to the tunnel, when he appeared to have pushed Taylor, who was asking him to retreat.

Andre Gray’s penalty three minutes into injury time had Wenger incensed, only for Alexis Sanchez to convert a spot-kick of his own some eight minutes into the added time, sealing the Gunners’ victory.

Wenger confirmed on Friday morning he would not contest the FA charge, then admitted his own conduct had overshadowed Arsenal’s gritty win.

“Yes, this team has shown qualities that are very important,” he said when asked if his team’s approach had been lost during the frantic ending at the Emirates Stadium.

“We are a team that has produced more goals in the last five minutes than anyone else, it shows that we are relentless and (have) a refusal to give in no matter what happens, we keep going.”

Arsenal even rode out Granit Xhaka’s red card to see off Burnley, with Wenger admitting without a clutch of late goals the second-placed Gunners could be as low as seventh in the Premier League table.

“That is a very interesting quality in the squad,” said Wenger.

“On top of that, the contribution of the players coming off the bench this season has been absolutely remarkable.

“That shows you as well that there is a great unity in the team. These are qualities that will be very important going into the last four months now.”