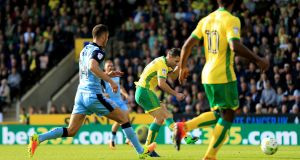 Championship round-up: Wes Hoolahan inspired Norwich as they continued their superb start to the season at Carrow Road to beat Rotherham 3-1and move back to the top of the table.

The Canaries made it 16 points from a possible 18 at their home fortress as goals from Republic of Ireland playmaker Hoolahan, Cameron Jerome and substitute Steven Naismith saw off the league’s bottom side.

Dexter Blackstock briefly brought Rotherham into it by cutting Norwich’s lead to 2-1 midway through the second half, but Norwich found a third and held on comfortably to move ahead of Huddersfield, who are set to face Sheffield Wednesday on Sunday.

Rotherham gave a good account of themselves but the fact remains that they have lost five games on the trot and remain rooted to the foot of the table.

Alex Neil’s side took a while to get going but there was no looking back once they went in front after 17 minutes. Hoolahan showed great composure in the box to sidestep a defender and slide the ball past Lee Camp after good work from the impressive Alex Pritchard on his first league start.

Jacob Murphy should have made it 2-0 before the break only to shoot wastefully into the side-netting, but City continued to dominate and finally got the second goal they deserved midway through the second period.

The excellent Hoolahan swung in a cross for the left that Jerome guided home with the slightest of touches and it looked as though it would be a comfortable end to the game for the hosts.

But after seeing an effort from Jon Taylor chalked off for offside the Millers gave themselves a lifeline after 74 minutes. Darnell Fisher got down the left and crossed for Blackstock, who had only been on the pitch for four minutes, to convert from close range.

Rotherham never really threatened to score a second however and Norwich made the points safe in the 89th minute when Naismith was left with an open goal after a cross from the left from fellow substitute Josh Murphy.

Dwight Gayle moved to the top of the Championship goal-scoring charts with a brace as Newcastle beat Brentford 3-1 at St James’ Park to climb to second in the table.

Jonjo Shelvey was the architect behind all three of the home side’s goals as they recorded a third straight league win.

An early Goal of the Day contender from Wes Hoolahan?
Send in your nominations using #GoalsExpress #SSNHQ https://t.co/lA7NPrY0mU

Republic of Ireland defender Ciaran Clark headed in the opener for the hosts, while Scott Hogan’s second-half effort for the Bees was little more than a consolation.

Rafa Benitez had urged his side to make a good start in his programme notes and the Spaniard was not to be disappointed as the hosts went two up inside 16 minutes in front of a bumper crowd of 51,885.

It was Brentford who carved out the first opportunity of note in the ninth minute when Maxime Colin’s cross from the right found Hogan in acres of space but the striker headed high and wide.

Shelvey was also at the heart of the home side’s second goal in the 16th minute, with the Brentford defence failing to deal with his searching ball over the top and Gayle finding some space before rifling in a low effort from 12 yards.

The hosts thought they had a third after 23 minutes when Yoan Gouffran stung Daniel Bentley’s palms from 20 yards before Ayoze Perez converted with his hand – the effort rightly chalked off by referee Simon Hooper.

Christian Atsu’s curling shot from 20 yards whistled the wrong side of the post as Newcastle continued to dominate but Brentford finally got a shot on target after 35 minutes as Romaine Sawyers’s clever ball over the top found Nico Yennaris, whose volley was well kept out by Karl Darlow.

Gayle’s ninth goal in 10 games for the Magpies looked to have put the game to bed four minutes after half-time – the former Crystal Palace forward converting a tap-in from Shelvey’s low cross following a neat move down the left.

Brentford responded immediately as Hogan netted his eighth of the season from close range after Newcastle failed to deal with a 51st-minute corner.

Newcastle continued to press, with Perez seeing a low effort well saved and Shelvey spurning a chance to register the goal his performance deserved when he curled a 74th-minute free-kick over the bar.

Gayle was denied a hat-trick when Bentley kept out his long-range effort late on, while Shelvey would have had a fourth assist had Achraf Lazaar not fired wide from his pass in stoppage time.

Elsewhere, Steve McClaren enjoyed a winning start to his second spell as Derby County manager after a 1-0 victory at home to Leeds.

The former England boss was named as Nigel Pearson’s successor this week and substitute Johnny Russell’s second-half strike proved enough to earn only their third win of the season, with Leeds denied by the woodwork at the end of each half.

Brighton lost ground on the top two as Preston snatched an injury-time equaliser in a 2-2 draw at the Amex Stadium.

David Stockdale’s mistake allowed Jordan Hugill to give North End an early lead but two goals in 11 second-half minutes through Sam Baldock and Glenn Murray appeared to have won it for Brighton, only for Simon Makienok to head a last-gasp leveller.

The game of the afternoon was at Oakwell where Fulham twice came from behind to clinch a 4-2 victory against 10-man Barnsley.

Goals from Marley Watkins and Sam Winnall were cancelled out by Lucas Piazon and Sone Aluko respectively before Scott Malone and Chris Martin earned Fulham their first win in seven matches.

Barnsley then had Josh Scowen sent off for a poor tackle on Scott Parker as their winless run extended to five matches.

QPR remain without a home win since the opening weekend after a 1-1 draw with Reading.

Ipswich failed to score for a fifth match in succession as Blackburn kept their first clean sheet of the season in a 0-0 draw at Ewood Park, while Championship newcomers Wigan and Burton also shared a goalless stalemate.