Welbeck redeems himself to sink Saints after Shane Long’s opener 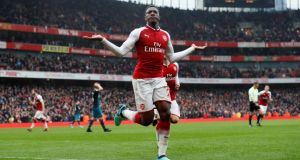 The frustration was too much for Jack Stephens to bear. It had been a pulsating battle, featuring awful defending from both teams and a contender for miss of the season from Danny Welbeck, and Southampton were desperately piling forward in search of a second equaliser when Stephens felt Jack Wilshere nibbling at his ankles and took the bait.

The defender’s reaction – a blatant shove on Wilshere, who had performed the role of wind-up merchant to perfection – left Andre Marriner with no option but to send him off. It was indefensible from Stephens, who had earlier let his team down with some shoddy defending for Arsenal’s first two goals.

Mohamed Elneny would also be sent off for a tamer push on Cédric Soares as the game descended further into chaos in stoppage-time, although Arsenal were beyond caring at that point. This was a free hit for them, but it was of paramount importance for Southampton, who were on the verge of claiming a valuable point in their battle against relegation.

Mark Hughes’s team were denied when Alex Iwobi’s cross from the right found Welbeck and the Arsenal striker climbed above Cédric at the far post and headed the winning goal past Alex McCarthy to break Southampton’s hearts.

It came as no surprise to see Hughes dispense with the gung-ho approach that had proved so reckless against West Ham last weekend. Southampton began with a cautious 5-4-1 system, the return of the combative Oriol Romeu giving the midfield a steelier look. With the unselfish Shane Long foraging on his own up front, it was a starting XI that hinted at a renewed determination to focus on the ugly side of the game on a rainy afternoon in north London.

After all, progress for Southampton would be making sure that it was still a contest after the first 20 minutes. Yet while they sat deep out of possession, the visitors had players with the energy to unsettle Arsenal on the break and James Ward-Prowse had a wonderful chance to give them an early lead, only for Héctor Bellerín to hack the midfielder’s bobbling shot off the line.

The opening had stemmed from an error from Shkodran Mustafi, who had failed to cut out a long pass towards Dusan Tadic, and it soon became clear that the German was a weak link in Arsenal’s defence. Calum Chambers bailed out his fellow centre-back after another burst from Long, but Southampton’s reward arrived in the 17th minute. Lazy defending from Sead Kolasinac allowed Cédric to squeeze a cross towards the near post from the byline and when Mustafi stood still and gazed at the ground as though he had never seen a football before, Long nipped in front of him to prod beyond the exasperated Petr Cech for his second goal in 46 appearances.

Perhaps it was to be expected that Arsenal would play like strangers during that early spell. The Emirates was far from full yet again and Wenger’s decision to rest seven players before his side’s trip to CSKA Moscow for the second leg of their Europa League quarter-final on Thursday demonstrated where Arsenal’s priorities lie at the moment. Their challenge for a place in the top four is all but over, barring an unlikely collapse from Tottenham Hotspur, meaning that Champions League qualification depends on whether Wenger can deliver the first European trophy of his long reign.

It said little for Southampton’s ability to respond to adversity that they found themselves trailing at the break. Arsenal equalised with their first coherent attack, Welbeck conjuring a beautiful flick from Iwobi’s pass, the ball running into the area for Pierre-Emerick Aubameyang to demonstrate his predatory instincts by shaking off Stephens and beating McCarthy.

Aubameyang’s sixth goal since his arrival from Borussia Dortmund settled the mood and Southampton’s porous defence was exposed when Welbeck scored seven minutes before the interval. Iwobi was involved again, finding Welbeck on the left, and the striker sped past Stephens before his powerful shot from 20 yards hit Maya Yoshida, whose punishment for turning his back on the ball was seeing it fly into the right corner.

But Southampton refused to be cowed. McCarthy kept them alive with some fine saves at the start of the second half and they chased an equaliser with impressive vigour, Long and Pierre-Emile Hojbjerg testing Cech, Wesley Hoedt forcing Elneny to clear his header off the line.

Arsenal’s loss of focus encouraged Southampton, who thought that they were level when Long turned Hojbjerg’s wayward shot past Cech, only for an offside flag to spare the hosts.

Wenger was concerned enough to introduce Wilshere in place of Reiss Nelson, who faded on his first Premier League start, but nobody could argue that it was undeserved when Austin equalised in the 73rd minute. Cédric drove inside from the right and Austin, who had just replaced Yoshida, converted the right-back’s cross.

Cech denied Austin a second a few minutes later, but Hughes would soon be darkly muttering under his breath again. Southampton must have sensed that their luck was in when Welbeck sparked howls of disbelief from the crowd by turning Wilshere’s cushioned ball over an unguarded net. They were wrong.