Europa League now Arsenal’s only opportunity of silverware this season 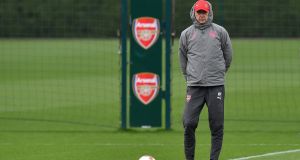 Arsène Wenger is hopeful that current diplomatic tensions between Russia and the UK will not impact on Arsenal’s Europa League meeting with CSKA Moscow. CSKA visit the Emirates Stadium on Thursday, before the second leg of their quarter-final takes place in the Russian capital a week later.

The tie comes against the backdrop of heightened diplomatic tensions between the British government and the Kremlin over the poisoning of Russian spy Sergei Skripal and his daughter with a nerve agent in Salisbury last month.

Diplomats have been expelled from both countries, while there have been calls for England to boycott this summer’s World Cup in Russia.

Arsenal’s meeting with CSKA comes at a time when relations are at a low point, but Wenger does not want the match to be involved in the political tensions.

“Honestly, nobody knows really what’s going on.” he said. “It looks more to be diplomatic relations between England and Russia at the moment are a bit complicated. I just hope it won’t affect both ties, and that it will not affect the supporters. Nor for the Russian people who come over here, and not for English people who want to travel there.”

The Europa League is now Arsenal’s only opportunity of silverware this season, while a return to the Champions League only looks feasible by winning this competition. The Gunners are 13 points adrift of the top four with just seven games remaining, and replicating Manchester United – who won the Europa League last season but only managed to finish sixth in the Premier League – remains on the cards.

Wenger has seen his side beat Ostersund and AC Milan to reach the last eight – winning both of those ties following an impressive showing away from home in the first leg. This time around they welcome CSKA to London before travelling for the return leg, and Wenger admits he would rather play at home second. ‘

Asked if he would prefer the legs to be reversed, Wenger said: “Ideally, yes, but then again if you want to do well in Europe you don’t choose. You accept the problems you face, and you sort them out and you solve them. That’s down to the quality teams, and nobody always has the ideal way.

“If you want to go far you have to accept at some stage that you have to play first at home and then away.”

Arsenal’s chances of booking a place in the semi-finals have been boosted by the return of Alexandre Lacazette. The France international has not started a game since the 3-1 defeat at Swansea on January 30th, but is available following knee surgery – with Wenger ready to throw him back into the starting line-up after a scoring cameo off the bench in Sunday’s win over Stoke.

Wenger’s other selection dilemma comes in goal, with the 68-year-old refusing to reveal whether he would select David Ospina – first choice in the Europa League – or Petr Cech, who is fit again following a minor groin injury. – PA