Man City were rumbled – now they must respond for United

City could be crowned champions with win over their rivals 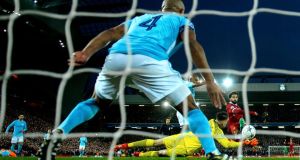 The stakes could not have been much higher than in the last encounter either, and the emphatic nature of Liverpool’s win in the first leg of the Champions League quarter-final gives some credence to Klopp’s insistence that, but for Sadio Mané’s unfortunate dismissal at the Etihad in September, Manchester City might not have skewed the balance of this season’s head-to-head contest in the Premier League by coasting to a 5-0 victory.

Even taking that result into account, Klopp has won more games than he has lost against the City manager – seven wins and one draw from 13 meetings – and though Cook is able to boast an unassailable 100 per cent record through his one-off FA Cup victory, no regular pitchside adversary of Guardiola’s can get anywhere close.

Certainly José Mourinho, whose often overcooked personal rivalry with Guardiola was at its peak when the latter was in charge of Barcelona, has not succeeded in unnerving the City manager in the way Klopp has. When Mourinho brings Manchester United to the Etihad on Saturday it will be for his 21st meeting with a Guardiola team. From the 20 previous games, Mourinho has four victories, with 10 defeats and six draws. Another defeat in a game that could see City crowned champions was widely assumed – though that was before the Guardiola gameplan was so spectacularly blown apart at Anfield.

No one is suggesting for a moment that Mourinho is likely to copy Klopp’s tactics against City, with Romelu Lukaku asked to replicate Roberto Firmino’s pressing and movement, though United and their supporters can only be emboldened by the way the champions-elect have faltered right at the moment when everyone was expecting their supremacy to be rubber-stamped.

Actually, faltered might not be a strong enough word. City were rumbled at Anfield and for a short time in the first half the elegant construction that has drawn praise from all quarters in a seemingly unstoppable glide towards the title was rattled in a way that has not been seen this season.

Klopp was generous in victory, arguing that City did not play badly but were not allowed to create their usual number of chances, and he had a point. City did not play poorly by most teams’ standards, but, by the benchmark they have set for themselves, they were terrible.

Even Guardiola left himself open to criticism. Selecting Ilkay Gündogan ahead of Raheem Sterling was a conservative ploy that Liverpool were able to exploit, and not making changes to the system until almost an hour had been played and three goals conceded was hardly the sort of decisive interventionism that has earned the City manager such a cerebral reputation. Leroy Sané did not have a bad game, he just found himself up against an extremely capable full-back in Trent Alexander-Arnold, yet long after it had become obvious that City were not going to get any joy down the left wing, that is where the ball kept going.

The one opportunity that might have changed the game fell to Sané at 1-0, yet in keeping with an evening of poor decision-making the winger went for glory, with Kevin De Bruyne free in support, and failed even to hit the target.

There was surprisingly little in the way of encouragement for City. Gabriel Jesus did not look the answer up front, where admittedly he was living on scraps, but he could have performed his high-pressing duties more effectively and should have been able to avoid a late booking. Nicolás Otamendi seemed to be affected by the Anfield atmosphere and reverted to his error-prone ways of last season while Sterling, unsurprisingly, was unable to answer the taunts of the crowd when he came on late to attempt to rescue a lost cause.

For the very biggest clubs, which is how City want to see themselves, only the big-eared trophy will do

The question, now that City have been exposed as light up front, porous at the back and less than tigerish in midfield, is not so much what United will do to them in the derby but how they themselves will react. With the second leg against Liverpool coming up on Tuesday, there is suddenly no time for celebrating, even if City win the title against their neighbours and rivals.

The likelihood that has to be faced is once again going out of Europe ahead of schedule – for all his tremendous Barcelona record, Guardiola has yet to reach a Champions League final with either of his two clubs outside Spain – and the way City are set up, indeed the way their manager thinks, mean even the Premier League title will be scant consolation should the European elite go unchallenged again.

City won the Premier League under Manuel Pellegrini, after all. Bayern Munich won three Bundesliga titles under Guardiola, but it was no more than was expected. For the very biggest clubs, which is how City want to see themselves even if this latest disappointment suggests they are still a work in progress, only the big-eared trophy will do.

Although it is not impossible to come back from a three-goal deficit, attempting to do so three days after playing a derby on which the domestic title might hinge ups the ante somewhat, and having to face Klopp’s Liverpool completes the tallest of orders.

It has been a while since Liverpool have been able to regard themselves as one of the very biggest clubs, either in terms of financial resources or consistent achievement, though evidently their ability to pack a punch in Europe remains unchanged. They have exactly the right manager in place, enviable support and a bold spirit of adventure capable of taking them a long way.

City may be closing in on a third title in seven years while Anfield is approaching 30 years in the wasteland, yet the stern lesson for the second leg is that when Liverpool come alive in Europe they can make even Guardiola and his players look like wannabes.

1 Munster braced for worst of financial crisis due to Thomond Park debt
2 Gerry Thornley: Home and away Six Nations could be its ruination
3 European clubs must take lessons from financial demise of former greats
4 Arsenal kit still on sale in China despite Ozil’s Uighur comments
Real news has value SUBSCRIBE