Only Jürgen Klopp held firm with his tactics and approach. Only his team delivered

Liverpool have apologised to Manchester City after bottles were thrown at their team bus as they arrived at Anfield for the Champions League quarter-final first leg on Wednesday (April 4). 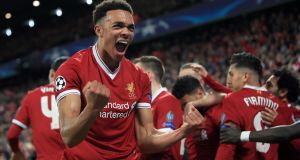 This was the wrong time and place for making concessions. The team coaches were re-routed away from the King Harry pub on safety grounds by Merseyside Police but Manchester City were still ‘welcomed’ to Anfield with bottles, flares and a public apology from Liverpool. Pep Guardiola made one of his own, sacrificing the penetrating speed of Raheem Sterling for the more measured influence of Ilkay Gündogan, but that backfired, too, as Liverpool blitzed the runaway leaders of the Premier League in the Champions League quarter-final first leg.

Only Jürgen Klopp held firm with his tactics and approach. Only his team delivered.

With stellar contributions from Mohamed Salah, Trent Alexander-Arnold, James Milner and, forget the list, every member of the Liverpool team, Anfield revelled in another superb European night as Klopp’s men moved imperiously towards the semi-finals. They were assisted by Guardiola’s decision to deploy Gündogan at the expense of Sterling, who has admittedly struggled on his returns to Anfield, until switching the pair with 57 minutes gone. By then it was too late to change the game. It may be too late for the tie. Gündogan was found wanting for Liverpool’s first and second goals. The kiss he received after the final whistle from Klopp, his former coach at Borussia Dortmund, was the only present he got from Liverpool all night.

Klopp called it “an opportunity for football” – a chance for two forward-thinking Premier League teams to entertain the watching world – and urged “those of us blessed to be part of it in person” to reflect on the potential of this tie to create moments that will be talked about for generations. His players did not disappoint as City were dispatched comfortably into the annals of momentous European nights. Chelsea in the 2005 semi-finals this was not, with the exception of another frenzied atmosphere.

City’s passing, movement and threat evaporated after a composed start while Liverpool fed off the energy of a partisan crowd and swamped England’s champions-elect in a manner reminiscent of the nine-minute spell that ended the visitors’ unbeaten league run here in January. This time they beat Ederson three times in 19 minutes. The bravery Klopp had requested was fundamental to the first-half onslaught and displayed by every player wearing red.

Loris Karius delivered a passable impression of Ederson in the opposite goal with an impressive range of distribution. Andy Robertson rampaged down the left – sprinting half the length of the pitch in pursuit of a fourth goal at one point having intercepted a careless pass from Kevin De Bruyne – while the oft-maligned Dejan Lovren rarely took the easy option when pressed in possession. It was three vastly different but essential components of the Liverpool team that epitomised the gulf between the Premier League teams on the Champions League stage: Salah, Milner and Alexander-Arnold.

The Egypt international has encouraged comparisons with Lionel Messi of late through the majesty of his left foot and ability to weave into goalscoring positions inside the most crowded penalty areas. The comparison now extends to an absolute faith at his club, team-mates and supporters alike, that when season-defining moments such as this quarter-final arrive he will deliver. Salah deceived to flatter here. He started on the periphery, carelessly too, before seizing his first opportunity to tease and puncture the City defence.

Klopp had expected Guardiola’s team to offer Liverpool space to attack, yet it was still a surprise to see Salah all alone when the hosts broke. It was no surprise to see the £36.9m summer signing capitalising on Kyle Walker’s failure to clear and scoring his 38th Liverpool goal of the season. Salah now has 42 goals in 47 appearances this season for club and country and, if this was a contest to settle the Player of the Season dispute between himself and De Bruyne, the Liverpool winger won as handsomely as his team. The former Roma winger also displayed his creative quality with the inch-perfect cross that teed up Sadio Mané for Liverpool’s third.

Milner showed his creative side too, as he has done throughout the Champions League campaign, with an influential role in Salah’s break for the opener and Alex Oxlade-Chamberlain’s thunderbolt beyond a rooted Ederson. It was Alexander-Arnold’s emphatic riposte to being targeted as a weak-link by City, however, that demonstrated Klopp’s belief that bravery is not confined to attacking one of the most dangerous teams in Europe. The cross-field ball behind Alexander-Arnold to Leroy Sané was City’s preferred route from the start. The 19-year-old was caught out on the first few but his concentration never wavered and he went on to relish the confrontation with the Germany international, playing a decisive role in the bonus of a clean sheet.