Guardiola ‘sorry for the fans’ after City second-half capitulation

‘My dream is happening in the first half, when we didn’t concede one shot on target’ 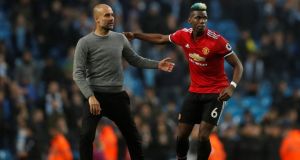 The stars had aligned to give swashbuckling City what Vincent Kompany called a “once-in-a-lifetime opportunity” to seal the league on home turf against their bitter rivals.

The dream was on as City captain broke the deadlock and Ilkay Gundogan added another in a first half far more one-sided than the two-goal advantage suggested against shambolic United.

Yet Jose Mourinho’s men rallied remarkably. Paul Pogba, subject of so much scrutiny after Guardiola claimed to have been offered the player in the January transfer window, brought things level with a quickfire brace, before Chris Smalling volleyed home to secure a 3-2 win that rocked City and stopped them sealing the title.

“Of course, we wanted to win today,” City boss Guardiola said. “I am not going to deny that, but we know exactly which team we play.

“They are second in a good league, but I am here to try and analyse the feelings.

“I am sorry for the fans, but I don’t think they can have complaints about what we have done.

“When you analyse the game, it was good, so I cannot expect 30 minutes and the opponent doesn’t do absolutely anything.

“My dream is happening in the first half, when we didn’t concede one shot on target.

“But they have pride, a good manager and maybe in half-time he said ‘oh guys, we’ve got to do something more’.

“But we ran, we fought, we did everything, so in one month, two month or one or two years and we’ll see the game and say ‘wow, how could we lose that game?’

“But we lost it, so for the fans it’s hard, but maybe we’re going to get more credit if we are able to win the Premier League ‘Okay, how tough it was’.

“And, of course, now it is not done, so the people say, ‘you’re going to win’. Wait. In football everything can happen.

“It’s the first time we’ve lost two games in a row this season and now we have to recover, try again, come back to basics and win games. We’re going to try next Tuesday and next games.”

Tuesday sees Liverpool roll into town for a crunch Champions League quarter-final tie, with City facing an uphill battle after the first leg ended in a shock 3-0 defeat at Anfield.

United’s players will be sat at home twiddling their thumbs after bowing out to Sevilla in the previous round after a dreadful Old Trafford defeat that was on par with their wretched first-half display at the Etihad Stadium.

Mourinho did not see it that way and was surprisingly magnanimous given the derby outcome and Guardiola’s controversial pre-match comments about Pogba.

“I told my midfield players that they didn’t need to improve because they were playing very well, even in the first half, all of them,” the United boss said.

“I think it’s very difficult to be a midfield player against Manchester City and Paul, Ander [Herrera] and [Nemanja] Matic were playing really well, but I needed more from [Jesse] Lingard and Alexis [Sanchez].

“I need them to connect our good football in midfield, and especially I need my defenders to be more confident because with just a little bit of pressure by City, they were kicking the ball, they were nervous and not bringing the ball with quality to my midfielders.

“I needed improvement in terms of confidence of the defenders, also to bring the line-up so we could lose the ball and press a little bit.

“And then it was about keeping confidence. Sometimes you are losing, and the instinct is to change immediately because you don’t like anything.”