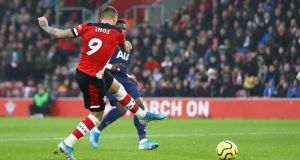 Just when a disappointing afternoon for Tottenham ostensibly could not get any worse, Harry Kane limped off down the tunnel 15 minutes from time clutching his left hamstring, with Spurs slipping to second defeat in four league matches. Spurs’ performance was abject, particularly defensively, and José Mourinho’s ire led to him being booked by the referee Mike Dean after the Portuguese petulantly wandered over to the Southampton dugout to confront a member of Ralph Hasenhüttl’s backroom staff, thought to be the goalkeeping coach, Andrew Sparkes.

For Southampton this was the latest episode in a brilliant Christmas period, with victory here lifting them towards mid-table after a return of 10 points from a possible 12. Familiar flaws marred Tottenham’s first outing of the new year, with Danny Ings fooling Toby Alderweireld to continue his extraordinary goalscoring form. It made painful viewing for Mourinho, who reacted to being booked by apologetically patting Dean’s torso, as another team successfully pierced holes in his frail defence.

Take nothing away from Southampton – Ings took his goal superbly – but Tottenham were floored too easily. Jack Stephens played a simple ball over the top and Ings allowed the ball to bounce before nonchalantly flicking the ball inside Alderweireld with his right foot and instinctively stroking home beyond Paulo Gazzaniga with his left. Gazzaniga was beaten and Alderweireld humiliated, with the former Southampton defender skidding away on the turf on all fours as Ings lashed in his ninth goal in as many league starts, taking his tally to 13 for the season; only Jamie Vardy has scored more goals in the top flight since August.

Spurs surrendered possession cheaply in the first place, with Ryan Sessegnon’s panicked pass from left-back landing at Stephens’s feet. To make matters worse Tanguy Ndombele was clipped by Stuart Armstrong in the buildup to the goal, prompting Mourinho to order Giovani Lo Celso to warm up. Within a few minutes Lo Celso was on, with Ndombele, who has struggled for fitness, limping off down the tunnel on his second start since November with less than half an hour played.

Southampton would have doubled their lead but for a crucial interception by Alderweireld after Nathan Redmond latched on to Armstrong’s low cross from the right. That move in itself typified and exuded everything that a lacklustre Tottenham side seemed to be missing, with Armstrong doing brilliantly to juggle and keep the ball in on the touchline before supplying Redmond with an inviting cross.

Hasenhüttl’s side kept Spurs at arm’s length throughout and the only whiff of Alex McCarthy’s goal came when Kane swept home a Christian Eriksen free-kick, only for the assistant referee to raise his flag.

In the first half Southampton also survived a VAR check when McCarthy clashed with Dele Alli after scrambling Kane’s powerful shot to safety. From the resulting corner Jan Vertonghen scooped over unmarked and, four minutes from time, Lucas Moura’s effort went out for a corner after smacking Ryan Bertrand on what was a miserable day all around for Tottenham. - Guardian