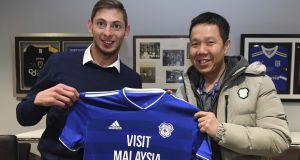 On the 16th of the month, Nantes visited Nimes in Ligue 1. Nantes’s 72nd-minute substitute was their number nine, Emiliano Sala, a 28-year-old striker from Argentina.

Three days later Sala was at Cardiff City completing a medical before a £15 million transfer that Cardiff thought would keep them in the Premier League. That night Sala flew back to Nantes to say his farewells.

Forty-eight hours later he set off again for his new club. As we know, Sala’s plane never made it. His body was found in wreckage off Guernsey two weeks later. Recriminations followed, centred on money. Amid these, a young man with everything to live for had lost his life.

So great was the storm surrounding Brendan Rodgers’s departure from Celtic for Leicester City, it’s easy to forget what precipitated it. Claude Puel was dismissed as Leicester manager after a 4-1 defeat by Crystal Palace, a fourth consecutive home loss. Leicester were 12th.

This did not concern Celtic fans until they discovered with astonishment that it did. Rodgers, the manager who led Celtic to successive Trebles and to an unbeaten 69-game run domestically, and who said Celtic was his “dream job”, was leaving for another.

Ten months on, Neil Lennon has Celtic stabilised and flowing. Leicester are 2nd.

Gibraltar 0-1 Ireland. How can you forget?

These were 90 minutes unlikely to linger pleasurably in the mind of a generation of Irish players and supporters. But this dull, attritional game marks the beginning of Mick McCarthy’s second coming as Ireland manager. “I pretty much hated every minute of that match,” he said, with customary bluntness.

McCarthy was only being honest. This was a change from the O’Neill-Keane era, but not a break. The same personnel employing essentially the same tactics struggled against the lump of rock even after Jeff Hendrick had supplied the only goal. At least Darren Randolph played well.

Juventus 1-2 Ajax: there has been much discussion about the usual suspects making it through to the last 16 of the Champions League, in part fuelled by the memory of Ajax last season.

From a league now second-tier, a club not funded by a wealthy individual or state, but with a glorious history of producing beautiful footballers and football, Ajax returned to the big stage with a bang. That was before this result, secured with goals from Donny van de Beek and Matthijs de Ligt.

United finished sixth of the Big Six. They won none of their last six games of the season. For Ole Gunnar Solskjaer, losing to his former club, this was a new low, worse than the 4-0 at Everton in a way.

Solskjaer talked about basics such as fitness and there have been some improvements since. But United are still sixth in the Premier League.

Liverpool 2-0 Tottenham: Liverpool’s sixth European Cup/Champions League was deserved on the basis of the 4-0 second-leg victory at Anfield over Barcelona in the semi-final.

Tottenham provided their own incredible comeback 24 hours after the Barcelona match – at Ajax – to deliver an all-English final.

After five years of Spanish domination, Madrid was the setting for the final, one shaped by the unappealing second-minute penalty awarded to Liverpool for a dubious Moussa Sissoko handball.

Mo Salah, a disconsolate figure in the previous final against Real Madrid, was the penalty scorer. Divock Origi added a late second goal. Overall, the game was almost Gibraltar-bad.

England 1-2 USA: the highest profile Women’s World Cup had this corker of a semi-final, a match of physical intensity and individual and collective quality that – for the neutral – lifted women’s soccer to another level.

There had been other fine play in the tournament from the Dutch, Brazil and Italy, but there was also some slow, sloppy football to cement the opinion of the sceptical. A big, dramatic semi-final contest was timely, watched by 53,000 in Lyon and nearly 12 million on TV in the UK.

From December 29th, 2018, to late March 2019, League Two Bury put together a 14-game run unbeaten. In May it would see the club promoted to League One.

In June manager Ryan Lowe left for Plymouth. In early August Bury were given a fortnight by the Football League to pay creditors or they would face expulsion. It came to pass on the 27th; Bury became the first club expelled from the Football League since Maidstone United in 1992.

In March a 29-year-old woman called Sahar Khodayari tried to enter the Azadi stadium in Tehran to watch a soccer match. Khodayari was in disguise because in Iran women are banned from watching football.

Khodayari was arrested, held for three nights and given a trial date in September for committing “a sinful act”. No judge turned up, but Khodayari was warned she was facing a jail sentence. When she left court she covered herself in petrol and burned herself so grievously she died a week later.

She became known as “Blue Girl” because of her favourite team’s colours and was referenced as such by Megan Rapinoe. But she has a name we would all do well to remember: Sahar Khodayari.

The FA Cup’s reputation has been in decline for most of this century, but it has retained prestige in the early rounds. Haringey Borough versus Yeovil Town was the sort of fixture to re-enforce romance.

But in a week in which England’s black players had been racially abused in Bulgaria, two of Haringey’s players and some coaching staff suffered similar and equally shocking abuse in England.

Haringey walked off after 64 minutes. They received a lot of praise for their action but it is appalling that it had to be taken. It is not the biggest issue clearly, but the players and club have been denied the simple sporting pleasure of anticipating the FA Cup.

Tottenham began 2019 playing at Wembley and with Mauricio Pochettino in the dugout. They end it in their new home beside where White Hart Lane used to be, with José Mourinho as manager.

It’s been quite a year for Spurs, when you throw in Ajax, a Champions League final and a record signing – £55 million Tanguy Ndombele.

Mourinho’s arrival after Pochettino’s departure confirmed Spurs’s rising box office status. It also gave Mourinho a viable way back. So far, so good, although that has been said before. The test will be what we are saying about him and Spurs this time in 2020.

The FAI. Not exactly saving the best for last, but it would be impossible to review 2019 without dwelling on the unravelling shambles that is the FAI.

To have liabilities of €55 million is a terrible illustration of the vanity and recklessness, and worse, which has made the organisation a laughing stock and a serious concern. Irish soccer has enough problems – to use a word – without being casually biffed about by politicians, as was the case this week.

In December 2019 a question can be asked legitimately about the FAI’s ability to function. Sadly this is both beyond belief and highly believable. Will it last 2020?