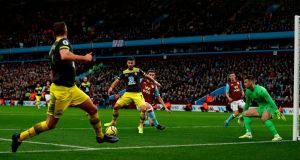 Danny Ings scored twice as Southampton climbed out of the relegation zone, and dumped Aston Villa in it, with a 3-1 win at Villa Park.

Saints took the lead when Irish striker Shane Long’s shot was saved by Tom Heaton and Ings was on hand to tuck in the rebound.

It was 2-0 on the half-hour mark after James Ward-Prowse’s corner was met by Jack Stephens, who nodded in past the diving Heaton.

Six minutes after the break Nathan Redmond’s ball into the box fell to Ings, who spun and fired high into the net for his 11th league goal of the season.

Jack Grealish pulled one back from the edge of the box but Villa were well beaten.

Sheffield United are a point off the top four after continuing their fine start to the season with a 1-0 win at Brighton.

The Blades had already had a John Egan goal ruled out by VAR due to handball when Oli McBurnie blasted them ahead from Dean Henderson’s long clearance.

David McGoldrick missed a golden chance to double the lead, and break his goal duck, when he rounded Mathew Ryan only to roll the ball into the sidenetting.

However, lacklustre Brighton could not find an equaliser as the Blades extended their unbeaten record away from home.

Raul Jimenez grabbed a late winner as Wolves came from behind to beat Norwich 2-1.

Todd Cantwell fired Norwich ahead in the 17th minute with his third goal in six matches.

But Romain Saiss equalised from Joao Moutinho’s cross and Jimenez netted the rebound after Tim Krul blocked from Matt Doherty to snatch the points.

Miguel Almiron tucked in a volley from an Andy Carroll header as Newcastle edged out Crystal Palace 1-0 at St James’ Park (his first Premier League goal for the club), and a Jay Rodriguez header a minute from time gave Burnley a 1-0 win at Bournemouth.

1 Ed Byrne, Johnny Sexton and Rob Henshaw to miss clash with Georgia
2 Kevin McStay: Maybe a knockout All-Ireland Championship is the long-term solution?
3 Gerry Thornley: Ireland don’t want to box themselves into a corner
4 Owen Doyle: Ireland suffered from officiating of the breakdown
5 Fernandes on the double as Manchester United get their revenge
Real news has value SUBSCRIBE