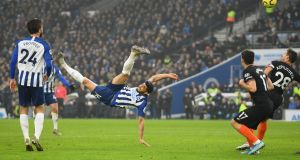 The transfer window is open and Chelsea need to dip into that £150m budget on the evidence of this incoherent performance. Frank Lampard spent the majority of a scrappy contest bemoaning his young team’s lack of conviction in the final third and they ended up learning a harsh lesson, conceding a late equaliser when Alireza Jahanbakhsh came off the bench to rescue a draw for Brighton & Hove Albion with an astonishing bicycle kick.

Chelsea were ragged in the end and Brighton could even have snatched an unlikely win, only for Kepa Arrizabalaga to make a vital save from Neal Maupay’s low drive. Lampard could only watch with a concerned expression on his face as Brighton’s spirited comeback gathered pace. It was poor from Chelsea given their earlier dominance and another bland attacking display will surely convince the Stamford Bridge club to take advantage of their transfer ban being lifted this month.

It had all looked so promising during the first 20 minutes. Chelsea were back to 4-2-3-1 after ditching their 3-4-3 system 34 minutes into their victory over Arsenal and they took control from the start, bossing possession and threatening down the flanks. It was an attacking line-up from Lampard, with Mason Mount’s movement in the No 10 role causing problems for Brighton, and the inclusion of Reece James at right-back gave Chelsea an extra option in attacking positions. There is an adventurousness to James and the opening goal arrived when the 19-year-old, who had made a surprisingly quick recovery from an ankle injury, charged forward to win a corner.

Willian’s delivery was lifted high to the far post, where Kurt Zouma was able to rise unchallenged and head back into the middle for Tammy Abraham to shoot from close range. Aaron Mooy blocked on the line and the ball broke to César Azpilicueta, onside and free to turn in his third goal of the season.

At that stage, with Brighton struggling to make their midfield diamond work, Chelsea could hardly have been more comfortable. But perhaps it was too easy. Complacency set in and there were flashes of frustration from Lampard as the dynamic started to shift. He wanted his forwards to show more conviction and he grew irritable on the touchline, turning away in disgust when Tammy Abraham wasted a decent opportunity in the 28th minute.

Abraham shot when he could have released Willian, who was unmarked to his right, and it is precisely that kind of raw decision-making that Lampard will take into consideration when he devises his transfer plans this month.

Too many of Chelsea’s attacks were breaking down in careless fashion and Brighton almost made them pay shortly before half-time, Neal Maupay scurrying down the left and teeing up Leandro Trossard to test Kepa with a curling effort. Kepa saved and Martin Montoya blazed the rebound wide.

Brighton, who lost Dan Burn when the left-back suffered a shoulder injury during an aerial collision with James, were gaining belief. Graham Potter had tweaked his side’s approach midway through the first half, jettisoning the diamond and matching Chelsea’s system, and he made another alteration during the interval, removing Yves Bissouma and bolstering his attack with the introduction of Aaron Connolly. The change meant Brighton were using a 4-4-2 and the game became frantic.

Potter had thrown caution to the wind, a risky move bearing in mind Chelsea’s speed on the counterattack, but the visitors were unable to capitalise. Christian Pulisic’s incursions from the left ended in disappointment and Lampard opted for a more conservative approach in the closing stages, replacing Mount with Mateo Kovacic.

Brighton were pressing hard, almost equalising when Connolly brought the best out of Kepa, and they finally made the breakthrough when Lewis Dunk’s header looped to Jahanbakhsh. The Iranian winger, surprisingly named on the bench after ending ended his long wait for a goal for the club against Bournemouth last weekend, leapt through the air and sent the ball soaring into the net with an incredible exhibiton of technique and athleticism. - Guardian