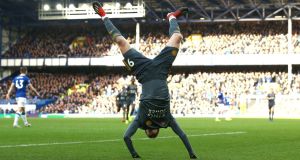 Claude Puel was supposedly the manager under pressure at Goodison Park yet Leicester City look in rude health in comparison to Everton under Marco Silva. The hosts were booed off following another dreadful display and a fifth defeat in eight games inflicted by Jamie Vardy’s clinical second-half strike. Silva starts the new year in need of new ideas.

Leicester climbed to seventh in the Premier League courtesy of a third win in four matches. Everton, by contrast, are adrift. They have won only once in eight matches, not kept a clean sheet in any of them and were easily contained on home soil yet again. In short, they were clueless and duly punished when Vardy seized on Michael Keane’s mistake.

An early kick-off on New Year’s Day brought predictably meagre fare. The atmosphere was akin to a bad hangover with an occasional groan breaking the silence and the performance of both teams did nothing to lift it.

Everton created what few opportunities arose in a first half strewn with basic errors. Their first came from a misplaced pass from Harry Maguire to Gylfi Sigurdsson, who picked out Richarlison for a first time shot that struck Jonny Evans. The Brazil international claimed it hit the defender’s arm, referee Martin Atkinson was unmoved, and Evans gave the winger more cause for complaint later on when catching him with a strong but fair challenge.

Jonjoe Kenny provided one of the pluses for Silva with an encouraging display in place of Seamus Coleman at right-back. The 21-year-old kept Ricardo Pereira quiet in the Leicester attack and was close to ending the stalemate when reacting quickest to a Lucas Digne cross that evaded its intended targets in the box. Kenny connected cleanly on the far side of the area but hopes of his first Everton goal were dashed by the woodwork. The full-back also set up Dominic Calvert-Lewin for a powerful header that flashed wide of Kasper Schmeichel’s goal.

Leicester threatened even less in the first half, despite receiving several invitations by the hosts’ careless distribution. A tame header from Evans was all that concerned Jordan Pickford in the Everton goal and Puel sought improvement by replacing Rachid Ghezzal with Marc Albrighton during the interval. Predictably, given the nature of a dire game, it was a mistake that provided the visitors with a cutting edge and not a change in personnel.

The breakthrough stemmed from a Schmeichel clearance that skimmed off the head of Theo Walcott and dropped to Keane midway in the Everton half. Under no pressure, the central defender produced a terrible first touch and gifted possession to Pereira. Quality then made its belated appearance at Goodison. The Portuguese right-back, stationed on the left wing by Puel, sent Vardy through on goal with a perfectly weighted pass. The striker took full advantage of his only chance of the game with a clinical low finish into the far corner.

Silva brought on Bernard and Cenk Tosun in an attempt to restore parity but, one shot and one header by the latter aside, Everton’s display remained lethargic and rudderless. They could have been punished further when Vardy broke from another Keane mistake and the defender escaped a handball claim inside the area. Harry Maguire also volleyed over a Ben Chilwell free-kick from only three yards out. His blushes were spared somewhat by an offside flag, but that call was wrong too.