Solskjaer: freewheeling United must tighten up at the back 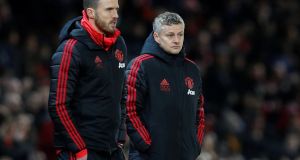 Caretaker manager Solskjaer has picked up three impressive wins since taking over from Jose Mourinho, but his side has yet to keep a clean sheet.

And the three goals United have conceded have all come from set pieces, which is something Solskjaer has worked on in training ahead of their trip to Newcastle on Wednesday.

“We need to keep clean sheets,” Solskjaer said after Nathan Ake headed past David De Gea from a Bournemouth corner.

“We have not done that so far so we know there are loads of things we need to work on.

“But this is the way we want to see ourselves attacking. We’ve conceded three goals from three set pieces.

“(Bournemouth’s goal) came from the one chance they had.

“We don’t concede too many chances in open play and that is great, but we have got to concentrate.

“My explanation might be, 3-0 up, game won, settle down and then a lack of concentration for one little second, and that’s enough.

“We saw it (from the sidelines) that they were going to do that but it’s difficult to shout the instructions.

“It was easier back home (in Norway). They would hear me there.”

Solskjaer, who confirmed Alex Ferguson attended training before the Bournemouth game, has given the United supporters something to cheer in the short time he has been in charge.

He has the team playing in a way the fans appreciate which they felt was missing under Mourinho’s final months in charge.

Solskjaer will be without the suspended Eric Bailly following his red card against Bournemouth.

Marcus Rashford should be available after sustaining a slight groin strain against the Cherries.

Solskjaer confirmed Alexis Sanchez will return to the side after his hamstring injury, while Chris Smalling and Marcos Rojo are close to being available.

United go to St James’ Park on Wednesday eight points behind Chelsea in fourth place and Solskjaer believes his side will continue to pick up points as long as the players perform the way he wants them to.

“It’s about performances and as long as we play the right way and dominate games more often than not, we will get enough points in the end,” Solskjaer said.

“The players will enjoy themselves if we keep on winning. I’d rather have the points on the board than not.

“Obviously, it’s down to how they prepare and how you work and what standards we set ourselves on the training field and with every little detail.

“We will get tougher tests like Wednesday against Newcastle.

“We’re away from home and I never enjoyed going there.

“There was one game maybe, we really enjoyed ourselves with a 6-2 win. But that was more or less it.”