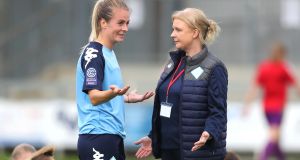 Lisa Fallon has returned to League of Ireland football with the Dubliner, who previously worked with Bohemians and Cork City, linking up with John Caulfield for a second time at Galway United.

On this occasion, Fallon will work as Caulfield’s first-team head coach, the latest part of an impressive set up that the former manager, a title winner with City, has put in place in an effort to win Galway promotion back to the Premier Division.

Fallon arrives with an impressive CV and the job is her first back in coaching since she returned from England where she had been a member of the Chelsea women’s team coaching staff, then manager of London City Lionesses.

She cut her time at the latter club short for family reasons after the coronavirus pandemic struck and limited her ability to move easily between the English capital and home.

“Since the last occasion we worked together I have seen significant developments in Lisa’s coaching ability,” says Caulfield. “Her time in England has transformed her into a top coach and has given her the understanding and belief to coach at this level.

“Over there she was operating in the highest learning environment and it is clear to me that now is the right time for her to show her qualities which I believe in. I am delighted to have her on board.”

Fallon said she has delighted to have been offered the role. “I’ve worked with John before and I know the high standards he demands. We know that absolutely everything has to go up a gear for the 2021 campaign. I’m really looking forward to that. I love the game, I love the League of Ireland and I love winning football matches. That’s what we are here to do.”