The life of a Premier League manager: six days of study, 90 minutes of action

Survival in top flight is more than a battle of wits, or even money; it’s a war of information 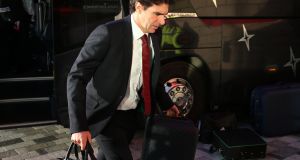 Aitor Karanka combs through 100s of pages of information on opponents before his Middlesbrough side take them on. Photo: Alex Livesey/Getty Images

Aitor Karanka, the Middlesbrough manager, spins in his chair and reaches behind him, sifting through the reports and the notes on the desk in his office at the team’s training ground.

The sheaf of papers he is looking for is by his laptop. He spins around again and puts it down in front of him with a thud. It is at least 100 pages thick. Some of the pages are covered in diagrams, others are decorated with portrait photos of players, still more with just text — some in Karanka’s native Spanish, some in English, some in both.

The information goes into the finest detail, not just tactical shapes and set-piece routines, but also breakdowns of individual players’ movements. Only Karanka will see it in full. His coaching staff and his players need only the snippets relevant to their work. “I am the only one who needs to know everything,” Karanka said with a grin.

This is the master copy, the blueprint. It is ready for Karanka, typically, every Tuesday morning, off one weekend’s match and ahead of the next. The dossier is the starting point. Everything Karanka and his coaches work on in training during the week, all of the video clips they show their players, all of the plans they concoct, will be tailored to the information contained on these pages.

It is not just habit. All of Karanka’s peers in the Premier League go into this much detail, too. Survival in England’s top flight is more than a battle of wits, or even money; it is a war of information. Losing is, often, not simply about playing worse; it is about knowing less. As Karanka sees it, his job is to make sure his players know “at least 95 percent” of what they will need to discern even before they step on the field.

That is why his staff prepares a new ledger for him before every game. Middlesbrough’s visit to Manchester United on Saturday might have the veneer of a special occasion, given that Karanka, 43, will be having a reunion with José Mourinho, whom he served as an assistant at Real Madrid, who showed him the ropes of management and to whom he says he will “always say thank you.” But Karanka, determined to show his former boss just how much he has learned, will prepare for the game just the same as he would for any other. There will be a hundred pages to study, thousands of things to consider and contemplate and counter.

One day last month, Karanka offered rare and detailed insight into all of the unseen work that he and his managerial peers put into every game of the Premier League season. Leafing through the report for his opponent that weekend — another of England’s giants, Chelsea — he outlined the process by which he prepares his players, describing how many arduous hours are spent in the shadows getting ready for those 90 lightning minutes every Saturday.

“A normal week, when we have played on Saturday, we have Sunday to recover and then Monday is a day off,” he said, beginning to flick through the pages. “Sunday and Monday, the analysts work to tell me everything about our next opponents.

“On Tuesday morning, the staff has a meeting: me, the analyst, the fitness and goalkeeping coaches, my assistants. First, we analyse our last game: how well we played, or how badly, the mistakes we made. Then the analyst gives his general thoughts on our opponents.

“From those thoughts, he will provide images and videos and reports, and from those we create the exercises for the training ground.”

He opens the report. It starts with the Premier League standings and goes through the shapes deployed by Chelsea in recent weeks. It lists a possible lineup that Karanka might pick, but also a handful of alternatives. It goes into an analysis of defensive shape, then a description of attacking style. There is an emphasis on set pieces. Karanka would, presumably, go along with Pep Guardiola’s assertion that these are a uniquely defining characteristic of games in England. Each opposition player is also analysed, his strengths, weaknesses, anything in particular that needs to be attacked — or defended against.

Karanka and his coaches then plot out training exercises with all that in mind, what Sean Dyche, the Burnley manager, refers to as the “kinesthetic” approach to learning.

“Then when you show them the video, and say we have to play this way, because they will have problems if we do that, they will say, ‘Oh, we just have to do what we have been doing in training.’”

That video session with the team will occur toward the end of the week, once the lessons have been burned into brains. But before then, usually on a Thursday, Karanka will hand his players personalised reports on their direct opponents. “Our central defenders will see the opposition’s strikers, our fullbacks their wingers, our wingers their fullbacks,” he said.

There are individual video sessions, too, for players eager for insight into what they could be doing better. One, Adama Traoré, 20, is on what Karanka calls an intensive process of learning where he can improve his game.

“One afternoon a week, Adama comes in to watch his clips,” Karanka said. “There are videos of games, of training sessions. We ask him questions, correct certain things. The analysts look at every movement he makes, the fitness coaches every detail of his output.”

Other players come in on a more ad hoc basis. “Players will come and ask to watch clips, and we will show them certain training sessions,” Karanka said. “In the past, when I was a player, the manager could say you made a mistake and you could deny it. Now: Here is the mistake, watch it.”

That empirical side of his job is important to Karanka. The two projects that currently concern Mark Ellis, Middlesbrough’s chief operating officer, are an expansion of the parking lot at the training center — one cost of the enlarged Premier League squad required after Middlesbrough won promotion last season — and Karanka’s request to install elevated cameras over the training fields, the better to analyse his squad’s sessions.

“The more information, the better for everyone,” he said. It is a belief given root by his own playing career, with Athletic Bilbao and Real Madrid. The most difficult moments, he said, came when managers told him what they thought he wanted to hear, rather than the truth.

He was “on that sofa” too often asking why he was not playing to contemplate misleading his own players, he said. It is the same reason he refuses to criticise a player in front of his teammates, preferring instead to highlight regular shortcomings in the privacy of the video room, and armed with evidence. “I show him alone,” he said.

His obsessive attention to detail does not always bear fruit, of course.

“Against Crystal Palace, we conceded a goal from a Wilfried Zaha cross to Christian Benteke, ” Karanka said. “We had seen the image three times in the video. We said don’t let them deliver crosses, and we said if they do, watch Benteke. They scored.”

The most frustrating goals to concede, he said, are when his players “know, and it happens anyway.”

The times when the preparation works, though, are cause for satisfaction, when the week’s exercises and the video sessions and the final team talks on Friday and Saturday are all heeded. A draw at Arsenal earlier this season was one such example.

“Adama played,” he said. “We trained all week how we could defend without him, so we could have him ready for counterattacks. We showed him where Arsenal would have one fullback, and the other, and where to attack. The players realised that was what we had been working on all week.”

It almost worked: Traoré had two glorious chances to claim an unlikely win for Middlesbrough. Even in the absence of victory, though, Karanka had vindication. All the hours of video, all the pages of the report, all the meticulously sculpted training sessions had been worth it; a long week well spent.

Forty-eight hours later, he opened the next report.

1 Betting shops face uncertain future as they prepare for Monday reopening
2 Tianna Bartoletta: ‘After you’ve gotten your medal, you become black in America again’
3 Sideline Cut: Marcus Rashford proves himself a leading man off the pitch also
4 Ian O’Riordan: An education in race and running during college days in America
5 Mature Ringrose keeping the ups and downs of rugby life in perspective
Real news has value SUBSCRIBE