Martin O’Neill: No Bale but Ireland have resilience in abundance 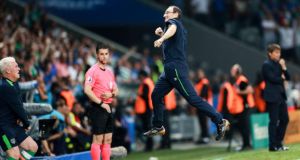 Martin O’Neill celebrates Ireland’s win over Italy in Lille. He has heralded Robbie Brady’s winning header as the moment of 2016. Photograph: Inpho/James Crombie

Ultimately 2016 will not go down as a vintage year, but it was at least one to remember for Irish football.

The last 12 months saw Ireland reach the knockouts of the European Championships, courtesy of a win for the ages over Italy, before heading into 2017 in pole position in their World Cup qualifying group.

Ireland have won three of their four Group D games thus far, with a late Daryl Murphy goal earning his side a priceless point against Serbia in Belgrade in their opening fixture.

But undoubtedly the show-reel moment of the year was Robbie Brady’s late winning header in Lille, which sunk the Azzurri and secured Ireland’s improbable passage into the last-16 in France.

And boss Martin O’Neill is confident that while his side lack a genuine superstar like Wales’s Gareth Bale, they do possess the necessary character to navigate a safe passage to Russia 2018 - something evidenced by their penchant for a late goal.

Speaking to FAI TV, he said: “Do you know, it really doesn’t bother me what people will say about the side. I do believe that we do have resilience in the team - I think the number of goals that we have scored late on in matches in the last couple of years kind of proves it, that we keep going to the end...

“We lack certain things, it’d be common knowledge to say a natural goal scorer, in our team. We missed Jon Walters practically out in the Euros.

“You’re probably fed up of me saying it but a 27-year-old Robbie Keane might have made all the difference in the world out there [FRANCE]as well. Unfortunately I didn’t have him in his pomp.

“This side, instead of regressing, has at least stabilised itself and I think has grown in confidence. You see Jeff Hendrick’s performances, you see Robbie [BRADY], you see these people, the improvement at international level. They feel as if they belong there now and that’s good, that’s great.”

Robbie Keane retired in September, with Seamus Coleman replacing him as Ireland captain.

And O’Neill has been pleased with how the Everton fullback has flourished in the role since being handed the armband, he said: “I felt he was pretty natural and he has gone and proven that. He has been absolutely fantastic as a captain and a player.

“Sometimes when you take over the captaincy your own form suffers a little bit because you are concerned about the effect you are having on other people... Seamus’s play has actually been enhanced as captain, if it’s anything to go by at both club and national level.”

O’Neill has recently found himself embroiled in a war of words with Everton boss Ronald Koeman over the availability of midfielder James McCarthy, and he has admitted the transition from club to international management has not been plain sailing.

He added: “When you have the players, it becomes that club atmosphere again, when you have them at your disposal... Once the players leave you, you know you might not see them for a couple of months, as is the instance now. After Austria I won’t see the players face to face until the build-up to the Welsh game [ON MARCH 23RD]”

And reflecting on a successful campaign, O’Neill heralded that header under the roof of the Stade Pierre-Mauroy as the moment of the year.

“A great moment, it had everything. There was a finality about it in the sense that the goal meant so much -itmeant we had qualified and [IT WAS]a vindication of everything that had taken place beforehand, and it put aside that performance a couple of days earlier in Bordeaux against Belgium.”