Old Firm derby short of relevance outside of fierce rivalry 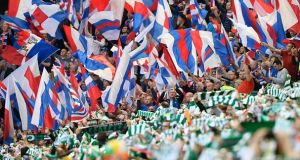 Celtic can extend their lead in the SPFL to 19 points with victory over Rangers at Ibrox on New Year’s Eve. Photograph: Jeff J Mitchell/Getty Images

Beyond the staple diet of bragging rights and bigotry, it is questionable whether there has ever been a less relevant Old Firm fixture. When the dust eventually settles, nothing on the SPFL landscape will have meaningfully altered.

Celtic’s grip on Scotland’s top flight is such that victory at Ibrox on Saturday lunchtime will extend their advantage over Rangers to 19 points – and with a game in hand. Rangers’ key aspiration, not that anyone will admit as much, lies in becoming the first domestic team to beat Celtic since Brendan Rodgers took office in the summer. Such an outcome would sting for Celtic’s fans but the ultimate prize of another title is a formality.

Rodgers has enjoyed the buildup this week, as well he might. Celtic’s manager insisted the Old Firm result “doesn’t matter” and that “huge pressure” lies upon Rangers. Celtic are fully entitled to cherish their dominance, not only by virtue of previous years playing clear second fiddle to their city rivals but because their overall business model is efficient and sustainable. In Rodgers, Celtic have a manager who has raised the bar.

Instant success has allowed Rodgers to dictate the narrative around him, a key home defeat in the Champions League by an understrength Borussia Mönchengladbach curiously disappearing from analysis of what has transpired during the Northern Irishman’s early Glasgow months. At the time, this was a stark disappointment.

Rangers’ situation is more complex. Their manager, Mark Warburton, spent pre-match media duties emphasising the financial gulf between the old adversaries. Realism, of course, does not always sit well in an environment of constant comparison. In cold analysis, Rangers occupy the runners-up spot in the SPFL as was always their most sensible target for the season.

It may be that Warburton was aiming this sentiment at his absentee chairman, Dave King, for whom grand spending plans have not come to fruition. In reply, King could reasonably point to Rangers having by far a superior budget to Aberdeen and Hearts, their challengers for second place, plus the string of Ibrox arrivals – Joey Barton among them – who have not justified outlay. Warburton’s inevitable frustration will arrive, if it has not already, with the realisation that Celtic will not be hauled back anytime soon.

“We can’t compete anywhere near with the wages currently being paid or fees being paid at Celtic,” Warburton said. “That’s not a negative on Rangers. We have to get back to those levels. We can’t buy our way out of this one at the moment. What we have to do is build. The one commodity we need is time.

“Referring back to Brentford, I’m looking at players like Andre Gray, James Tarkowski, Moses Odubajo. They were £200,000 or £400,000 players now going for £20m or more. All they had was time. There was no expectation on them. Brentford weren’t expected to go and beat Derby. That time allowed those boys to develop. Adam Forshaw, playing at Middlesbrough, was a free from Everton. Jake Bidwell was 50 grand from Everton.

“All they had was time to develop their talents. You don’t get that time in Glasgow, I understand that, but that’s what we need right now because we are not going to spend £50m. Our supporters, I’m sure, appreciate that.”

This marks Celtic’s 36th game of the season, nine of that number coming in December alone in what offers a nod towards farcical Scottish scheduling. It is to the credit of Rodgers and his players that they have won games while wholesale personnel changes have been implemented, just as victories have taken many forms. Celtic were 2-0 and 3-2 behind at Motherwell, for example, before summoning the spirit to prevail 4-3. The determination to maintain an unbeaten run throughout the domestic season, as has not transpired in Scotland since pre-1900, is strong.

“We want to win this game, of course we do,” Rodgers said. “But however it goes for us, we have had a brilliant opening period to the season.”

Celtic will head for Dubai during the winter break, which follows the derby, with Rodgers simultaneously seeking to add three players to his squad. That recruitment is with a view to preparation for next season’s assault on Europe. Long-term planning is a positive bi-product of Celtic’s current status. Ibrox really is nothing more than 90 minutes in manic isolation.