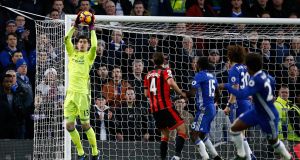 Thibaut Courtois will open talks over a renewed contract at Chelsea after his head coach, Antonio Conte, described the Belgium international as “one of the best in the world” and compared him favourably to Gianluigi Buffon.

The Premier League leaders, who hope to register a 13th successive victory against Stoke City on Saturday to at the very least maintain their six-point advantage at the top, are to offer Courtois improved terms in excess of £150,000 (€175,000) a week in a bid to deflect long-standing interest from Real Madrid.

His current deal runs until 2019 though Chelsea, who had quoted Real a prohibitive valuation of £73 million (€85 million) around 18 months ago, are aware the Spanish club still covet a player to whom they sent a message of support when he damaged the meniscus in a knee last season.

Conte did not seem surprised when that tactic was mentioned on Friday, and suggested he might consider doing the same to any Real player who suffered a similar long-term injury, but was adamant Courtois should be rewarded for his excellent form this season.

“Look, Thibaut is a Chelsea player and I want him to stay here,” the Italian said. “And I think he’s very happy to stay here. I see him with this club for many years. I want this, the club wants this. I don’t see any problem.

“He has great potential to continue to do great things, to reach great targets. [A new contract is] a club decision. But, in my opinion, yes, I think that a goalkeeper like Thibaut deserves to stay at Chelsea for many years and become a type of player to stay and write the story of this club, to become a legend at this club.”

The 24-year-old Belgian has made no secret of his desire to return to Madrid, where he spent three years on loan at Atlético from Chelsea, at some stage in his career but is currently settled at the south-west London club.

His progress is being overseen by Conte’s goalkeeping coach, Gianluca Spinelli, – following the departure of Christophe Lollichon with whom he had endured a fractious working relationship – and his form has been resurgent.

The leaders have kept 10 clean sheets in their 12-game winning run, with Courtois outstanding in particular in recent victories over Sunderland and Bournemouth.

Conte played alongside Buffon at Juventus, and later coached him at the club and with the national side.

“Their stories, their histories, are similar,” he said. “Gigi Buffon started his career young at Parma [at 17] and it was the same for Thibaut, who started to play early [at 16 for Genk]. I hope for Thibaut to repeat the same career as Gigi Buffon. Buffon, for me, is one of the best goalkeepers of all time. I was with him at Juventus before as team-mates, and then as his coach, in the national team also. Buffon is a legend for football, and I hope Thibaut has the same career as Gigi.

Conte has moved to speak with Courtois’s compatriot, Michy Batshuayi, this week after opting against offering the Belgium striker his first Premier League start in the absence of the suspended Diego Costa in the match against Bournemouth on St Stephen’s Day.

Batshuayi, a €38.8 million arrival from Marseille last summer, was instead granted only a few minutes of the contest after replacing Eden Hazard with the home side 3-0 up. He will remain among the substitutes, with Costa restored to the lineup against Stoke.

Asked if he had taken time to explain to Batshuayi why he had not been selected on Monday, Conte said: “Yes, but usually when I talk with my players I prefer to keep it a secret what is said in the conversation. For Michy, I think that he’s working very well, he’s improving a lot, and I’m sure that in the future, he will have his chance to play.”

West Ham United have indicated a desire to take the 23-year-old on loan next month, though Chelsea have no intention of letting the player leave mid-season.

“And he wants to stay,” Conte said. “He’s a young player. We are talking about a player who is 23. He’s starting his path in football. He has great talent, great potential, and I think it’s very important for him as a footballer to complete this season [here]. He wants to stay, and I’m happy for this.

Conte is hopeful the club are active in the winter transfer window, but implied the signing of a striker to act as back-up to Costa is not a priority.

“We are talking about finding the right solution in the right roles to improve the squad,” he said. “It won’t be easy [to buy in January], but we are trying. We are trying to do something.”