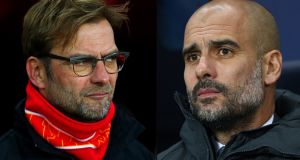 Pep Guardiola came to England with a reputation as the best coach in the world yet he travels to Liverpool prepared to accept he does not have a monopoly on entertaining football, describing Jürgen Klopp – his opposite number at Anfield this evening – as “the best manager in the world” when it comes to creating attacking sides.

The Manchester City manager knows Klopp of old – both have won Bundesliga titles and after eight meetings between Bayern Munich and Borussia Dortmund, the final score was four apiece. And when Guardiola took the opportunity to watch Liverpool’s 4-1 victory against Stoke City on Tuesday he could see the German coach had successfully imported the “heavy metal” brand of football that brought him to prominence.

“I can see why they call it that,” Guardiola said in the lead-up to the first Premier League meeting between the two coaches. “Our styles are not similar but I like a lot the way they play. Maybe Klopp is the best manager in the world at creating teams who attack the back four with so many players, from almost anywhere on the pitch. They have an intensity with the ball and without the ball, and it is not easy to do that.

“They attack wide sometimes but they especially like to attack from inside, through the middle. I don’t think there is another team in the world attacking in this way with so many players capable of launching moves in an instant.

“I learned a lot in Germany the first time I played his team. I was new and it was ‘wow’, what a good lesson. We lost 4-2. Afterwards in the league I learned a bit more about how to control those situations but it was never easy. When Klopp speaks about his football being heavy metal, I understand completely. It is so aggressive. For the fans it is really good.

“Our styles are not similar but I like a lot the way they play, for the spectators, because in three or four seconds they are attacking.”

Liverpool’s emphasis on attack is bound to put pressure on the City defence and Guardiola has already admitted he lacks numbers at centre-back and might be in the market for a new full-back. Concentration, he feels, will be key.

“Liverpool have quality players up front but, when you play against a Klopp team, the tactics are so important,” he said. “You have to reach a certain level. They have a specific way to attack you and you have to be in control.”

Liverpool are one point better off than City going into the game, which Guardiola regards as evidence of how well his side have played when being deprived of Sergio Agüero for a total of seven matches due to bans.

The club’s leading scorer returns from suspension and City hope their spearhead will help them gain ground on Chelsea as well as Liverpool.

“There are still six teams going for the title, or at least competing for Champions League places,” Guardiola said. “Once when I was a player we were 12 points behind Real Madrid and we still ended up champions. Tomorrow [Saturday] is not a final but it is an important game for both teams.”

And does Guardiola expect Liverpool, with their draining, high-energy pressing game, still to be around at the end of the season? “They are definitely title contenders,” the former Barcelona manager said. “He is a huge motivator.”