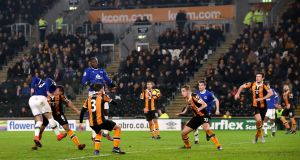 Hull’s formal coronation as the UK’s City of Culture for 2017 takes place on Sunday as the hangovers wear off. On this evidence Robert Snodgrass’ left boot should be amongst the primary exhibits.

For the threadbare hopes of its football club’s top-flight future hang on the Scotland international’s use of it. Here, Snodgrass’ sixth goal of the season, an exquisite free-kick, threatened to bail out his compatriot David Marshall for a first-half slice into his own net, only for Ross Barkley’s late equalizer to deny the Yorkshire club a chance to edge closer to safety.

Phelan spoke in the build up to this contest of the need to reinforce his squad with players “courageous” enough for the fight ahead. Yet it’s the grossest of understatements to say that Hull is an even harder sell now than when he did his last recruitment pitch in August.

Back then, he was negotiating in the slipstream of back-to-back wins from the opening two fixtures. A solitary victory and three draws since, however, left Hull bottom of the table and four points adrift of safety heading into the final game of the first half of their Premier League season.

Nor have Phelan’s first set of purchases in the transfer market proved a raging success. Ryan Mason, the club’s £12.5m record signing from Tottenham, went missing in a relegation duel at Middlesbrough in the first week of December and has not been spotted in a starting XI since; neither has Markus Henriksen, whose permanent £3.5m move from AZ Alkmaar is to be ratified next week; Dieumerci Mbokani, praised for his hold-up play, failed to score in his first nine appearances since returning to the English top flight.

The ex-Manchester United trainees Will Keane, subsequently sidelined for a year with knee ligament damage, and Mike Weir have made little impression. The Scotland goalkeeper Marshall, a moderate success, still averaged two and a half goals shipped a game.

So it has been to the club’s old guard that Phelan has turned as the stakes have become more desperate. Having held Manchester City for three-quarters of their previous match, he made minimal changes, handing David Meyler his first league start in more than two months – Sam Clucas was relieved of his ever-present status – and adding greater attacking potency with the inclusion of Adama Diomandé at the expense of Tom Huddlestone.

Hull’s extra threat in the final third was evident from the outset and they had already created three opportunities – Jake Livermore and Snodgrass shots blocked and too high respectively, plus Phil Jagielka forced to clear under his own crossbar – when they took a sixth-minute lead.

Snodgrass’s corner was flicked on by Harry Maguire and Michael Dawson, their gnarled oak of a centre-back, emerged beyond the far post to lace a silky volley beyond the helpless Robles.

Hull could not have wished for a better start. But Everton, officially the Premier League’s best of the rest as the highest placed club outside the big six, retaliated with several chances of their own.

Kevin Mirallas found an ally in the greasy surface as his grubber, after cutting in from the left, squirmed out of Marshall’s grasp and, thankfully for the hosts, out for a corner.

Then, with Gareth Barry orchestrating things from in front of the back four, the visitors went closer: Seamus Coleman’s 15-yard header from Barry’s arrowed centre clattering back into play off an upright. Marshall was left equally flat-footed midway through the first half when, after Barry opened space with a delayed pass, Barkley’s cross-shot skipped wide.

The sucker punch (quite literally) came in first-half injury time, however, as Mirallas swung in the corner and Marshall was cramped by the presence of Mbokani in his attempt to fist away, the ball travelling in the opposite direction to which it was intended for one of the more bizarre Premier League goals of the season.

Marshall’s next touch three minutes into the resumption went the same way. Crucially this time, however, his fingertips proved the difference between Romelu Lukaku’s deflected drive hitting the crossbar and flying beneath it.

The woodwork certainly gets a work-out when Hull are involved – recall West Ham cads voting a post their man of the match in their single-goal success in London earlier this month – and it was struck for the third time in the 55th-minute when Snodgrass caressed the ball over the wall and on to the bar. The disappointment was not dwelt upon. Given another sighter, after one of Maguire’s Beckenbauer-style marches from deep was crudely halted by Leighton Baines, Snodgrass got the perfect trajectory, arcing the ball into the top corner.

For a quarter of an hour, the KCOM Stadium reverberated. It was the sound of hope. Typically of their story since promotion in the summer, though, a committed Hull performance did not result in a Hull victory. Baines wriggled down the left, feigned, beat Snodgrass and dinked over a cross for Barkley to head home the fourth goal of a pulsating match.